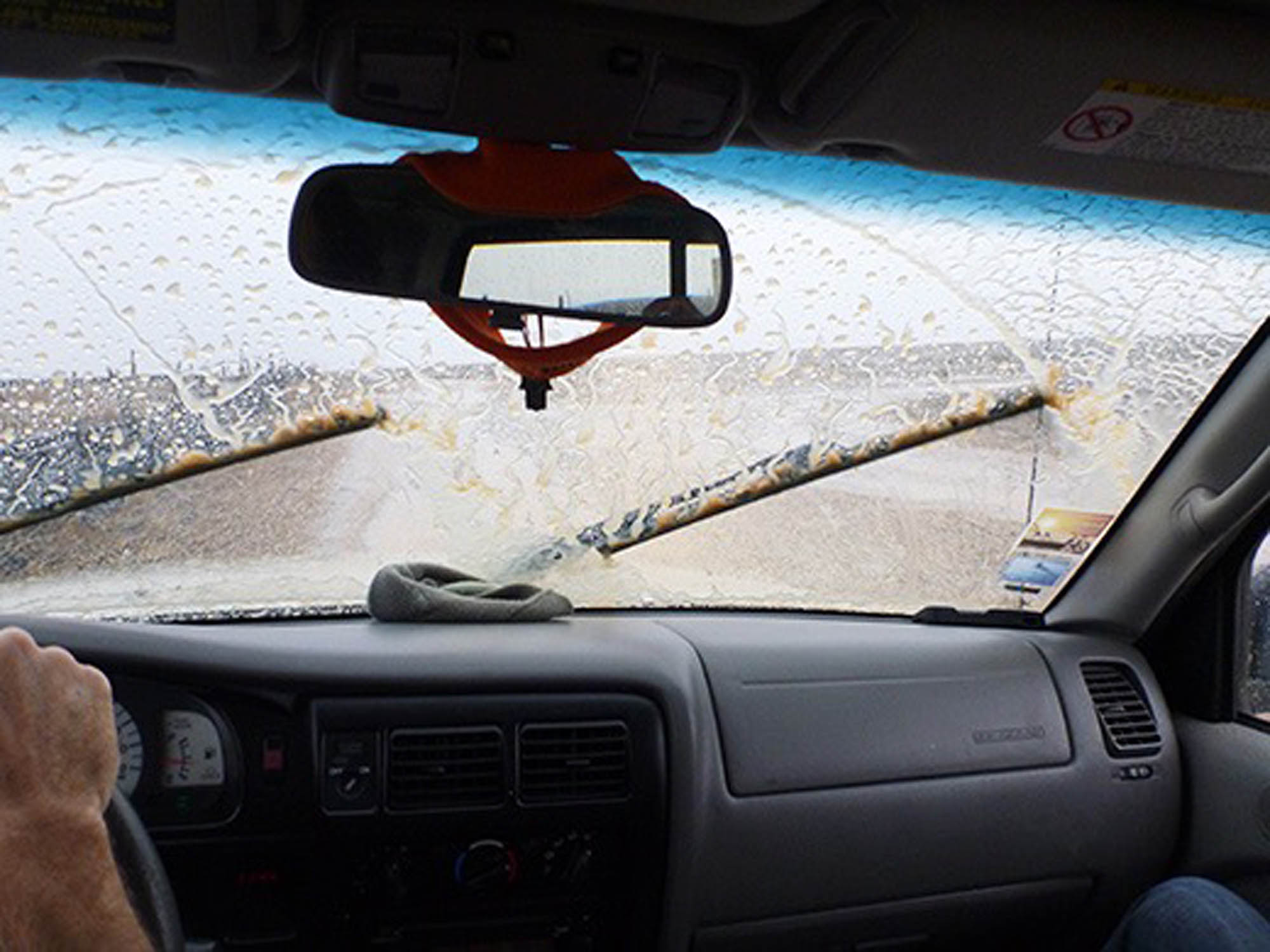 It’s intense how something like a wet, dirty windshield from driving in the snowy mix that just won’t stop coming down around here can make you realize how fortunate one is to be in this world, in this position, in this time.

I start the days pretty early; coffee, emails, schedule check, daily list, make another list and compare it to the list from the night before, make a final list, etc, and then cruise out and make the rounds to check a few of our jobsites before heading to whichever one I have the first appt at or will be working at for the duration of the day. Yesterday, I checked on two jobs in Harwich and one in Brewster before anyone got there, when they’re nice and clean sites, before the bombs of sawdust go off…took a few pictures, composed emails, etc, and then began making my way to Ptown where there are 6 guys waiting to finally get a cracking day of work in the sunshine that’s finally here. For the first time. In, seemingly, ever.

Somewhere in Eastham my windshield became so muddy that I couldn’t see out of it, or at least was getting annoyed that I couldn’t see perfectly out of it. There’s traffic, I can’t see, at this point in the early morning still my phone is going bananas with texts, calls, emails, more texts, questions, answers, vendors, subcontractors, employees, two 30-something-year-old men can’t get along with each other because one of them – god forbid – left a piece of wood so the other one had to actually walk around it (the horror!)…the really important, meaningful, things coming to light. Granted, the guys that work for me are awesome, as I’ll hire a good guy over a great carpenter any day of the week, and what’s really happening is that we are all at the ends of our ropes in terms of patience with all this snow and weather. It affects everyone, and it’s very tough for construction crews all over the Cape. We can’t get a full week’s worth of work; the work we can do is slow and very laborious; it’s icy, slippery, and we have to move slowly; we’re sometimes shoveling twice, three times, four times, five times…just to get to the same point we were at the day before; we’ve exhausted the interior aspects of our upcoming work already, and we’re a month ahead of those things, but we’re a month behind on the exterior work. Despite the record-breaking weather and obvious obstacles it has created, clients will still want their projects delivered on crazy deadlines that are just not physically possible as a result of what's come down from the sky over the last weeks or so. It’s not the end of the world, no, but it’s a pain in the ass for everyone. My phone is going crazy with this all happening…nonstop buzzing and dinging and ringing and buzzing and dinging and ringing, snowblower bouncing around in the back, shovels clanging, stuff flying everywhere.

When I put the phone down long enough to finally attempt to wash the dirt off my truck windshield somewhere in Eastham - my windshield sprayer is broken. It's just spraying stuff straight up in the air, doing a hell of a job cleaning off the top of the truck...but missing the windshield entirely, like a hose just flying wildly in the wind, spraying blue stuff all over the place.

And for some reason...there it is: end of rope. And you just think…what the f***!

And then I remember….

When we were little. Mom had three of us, me in the front seat, sis and little brother in the back of her decrepit always-breaking-down Chevy Celebrity. And I remember the morning-after-the-snowstorm, and I remember the windshield being dirty, covered in mud, spray from the trucks in front of us, it’s cold, icy, snowy, wet, and depressing. At this point, not even 7 am yet, she’d been awake for probably two hours getting three kids out of bed, cleaned up, dressed, fed, tamed, prepared for our day…all while preparing herself for her own day (instant Sanka coffee, diet Tab soda, more instant coffee). She’s driving me and the sis to our bus-stop near our afternoon babysitter's house, and dropping my little brother off at the babysitters for the whole day before heading to her school to work with her special-needs kids in Worcester. I’m sure we are all just being little angels in the car, too. (I was a nightmare growing up. Sis was perfect. Little brother was…little brother).

And I remember mom being fed up, not being able to see the road, windshield covered in mud and dirt and snow and rain as we neared the overpass of 395 heading that headed into Thompson- and mom's windshield spray...just not working.

So here’s mom, three of us in the car, likely screaming our heads off and just being three little kids stuck in a car. Our mornings were incredibly hectic. I’m sure we’re thrilled about going to school and having to stand at the bus stop in the cold and just being little kids. And here we are pulling over onto the side of the road, cars blazing by us two feet away, and mom is picking up snow from the snow banks to smash on the windshield and wipe it off with her hands so she could see out for another 10 minutes before having to stop and do it again and continue to drive us to our days.

And she just did it.

It was just part of the routine, part of the craziness and hectic-ness that was our morning and daily routine. Drive ten minutes, whip over to side of the road, get out of car, grab snow from the snowbanks, throw it onto the windshield, wipe it off with her hands, and keep going for another ten minutes. The whole way.

When mine broke yesterday, I instantly thought, “I’ll just whip into the store, buy a new motor for $150, pop it in there, and be good as gold.” I didn’t even have to think about dropping the money on a whim to fix a problem. Mom didn’t have $150 to fix hers. She just didn’t. Those wipers stayed broken for a long time. $150 seems like nothing, but it was everything to her back then. And it just wasn’t there. It wasn’t like she could just dip into the hidden account and get the money. She couldn’t ask anyone for it. There wasn’t a secret cash-stash in the house to slip into and magically find $150. It just wasn’t there. Just...not there, not happening.

Amidst the chaos of the early morning (which in the big scheme of things is not really chaotic at all); amidst answering all the messages, emails, texts, calls, etc; amidst trying to get two 30-something-year-old men to agree on moving a piece of wood over by one foot for five minutes so that everyone on the jobsite could continue to get along like little angels…

Yesterday- when my windshield was dirty and my windshield spray was broken – I remembered how fortunate I am and how thankful I am that we were raised the way she raised us.