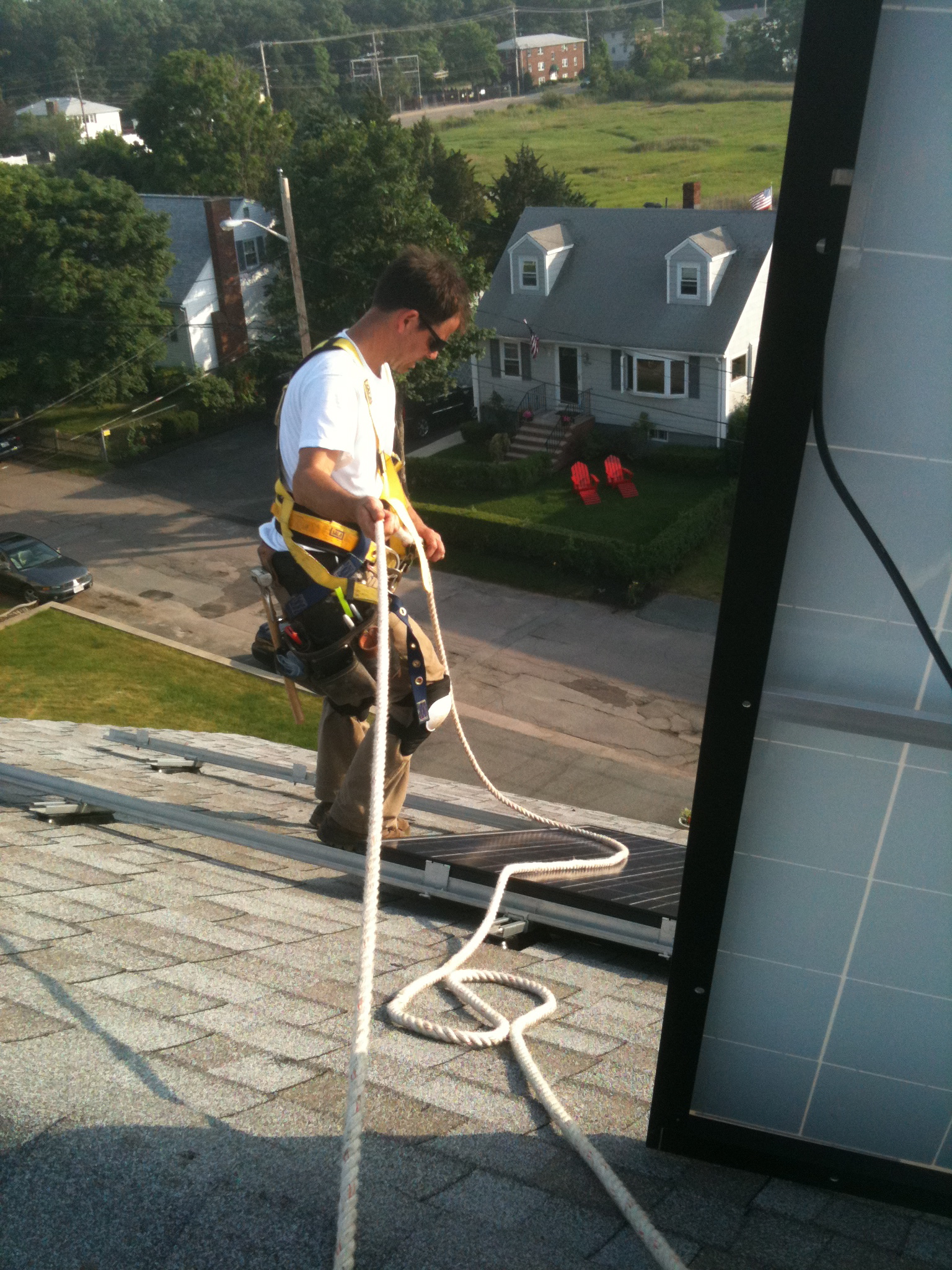 In preparation for the planting of the new garden - which I'm yet to take a picture of but will - we rolled into the Berry Patch farm on Sunday with a rototiller for the future edible masterpiece. Here's how we (I say we - i.e. me and the golden boy, because it's really his stomping ground behind the house already since he's been fertilizing it regularly for over a year now) acquired this precious (seriously??) patch of real estate: We live at the former Berry Patch Farm which is located at the Town of Harwich public gardens. I've been trying since before last summer to get a garden patch in the public garden but it's near impossible. There's about a hundred plots out there. It's not that the plots all get used - because they don't - but they do all have names already attached to them. Most of the plots have been in families for a long time. (The woman we helped this weekend till her plot has had it in her family for three generations. She used to garden there with her grandfather, then her dad, and now she gardens it herself. Her son now helps her once a summer when he comes home from Manhattan.) Generally though the plots and the garden themselves are full-on, full-tilt, people out there at 5:30am for the first two months of spring/summer as everyone gets spring fever and summer insanity, but then they kind of get left by the wayside as summer winds down. Some of the plots get used once or twice, some not at all, but names are still attached so we haven't been able to get one since we've been here, even though we live twenty steps away. Anyway...at the beginning of the spring, usually around the last week in April or first week in May, a few of the old codgers from town bring their tractors down to the public garden and till all the land with the huge rototillers they attach on the backs of their tractors. They're stodgy old fellers, old-timey Harwichers, cigars hanging out, straw hats on, just driving their tractors all around the field. Id' say there's a good chance those tractors don't get used that much any longer as there's hardly any true farm land around here anymore, but this is their day. We went out the door and made our way over to where they were tilling, started chatting, made a few friends, they asked where my plot was, told them I couldn't get one, and next thing I know they're plowing me my own plot right outside our door. Screw the town and the fees, they say. No one ever checks down here anyway... And then they till down a bunch of old brush for our plot. Sweet...

Long story short, we're working on our garden. We had to get our own rototiller to finish till all the land after the locals knocked down all the brush for us, and as we did we learned that our little plot was basically used as a landfill for others around the neighborhood for the last twenty years. We found plastic bags filled with trash, plastic bottles, bleach and detergent jars, all kinds of old toys, lots of old clothes, lots of old coca-cola cans, tons of composted old wood, cement chunks, old bike handlebars, and lots of old glass jars (but we didn't find them until they were smashed to bits.) But we're working on it. Took six hours to get a 15' x 15' plot tilled down to just soil, but it's there. The old woman we helped rototill her plot told us "You got your work cut out for you over there!". But we took a ride with the dump trailer and filled up on a load of free compost from the Harwich dump and threw that in there too. Planting is supposed to take place this Thursday. This should be a learning experience to end all learning experiences. Or at least funny. The soil looks good once we got all the crap out of there and tilled it, again, and again, and again, and again...

Saturday. Saturday just added about a gazillion loads of learning experience to the brain. On Saturday, Peekay and I went to visit Karen North Wells, wife of the late architect Malcolm Wells (www.malcolmwells.com) , at her Underground Art Gallery in Brewster near where we used to live. I've been fascinated with underground building for a long time, ever since I first read about it probably five or six years ago. I thought I'd just pop in quick to the art studio, check it out, get a few cards for Skip and Lisabeth with pictures of the underground gallery, and then be out. But we were the only ones in there, and Karen was working on a painting when we walked in. Two hours later and tons of talking and reading of books, and talking about architecture and how poorly things are built these days, and looking at Malcolm's old building plans, and walking around the house and gallery....I left in amazement and totally flabbergasted. Malcolm wasn't a genius as much as he was/is/will continue to be an incredible inspiration. He didn't invent underground building, but he recognized the errors of his previous architectural ways in building monstrous above-ground, asphalt-covered structures, and he changed. He wasn't thinking about things that people didn't know about or haven't done in various ways before, but he was unbelievably smart and dedicated his life entirely to a building method that left little footprint on the earth. Nevermind calculating your carbon footprint, super insulating, geothermal, triple-pane argon windows....Malcolm built the smartest homes ever. And if and when I get to build, I'm building underground. And it will be the most comfortable building anyone will ever stay in. Peekay wasn't in the gallery two minutes and he curled up on the floor near the wood stove and went to sleep for the entire time. If he says it's comfy, it's comfy. We picked up old plans of Malcolm's from Karen for a small 320 SF underground home, as well as plans for a 1000 SF underground home. You should check out his books and writings, for the style alone that they're written in is worth having them in your home. I'm pumped. I don't think anyone will ever call us to build one, even though they should, but we will when someday we get the chance. Karen says they don't ever turn the heat on, not even in January. Just a few logs in the wood stove come the winter holidays and that's it.

Monday we basically finished building the new offices of SunWind, LLC. Tim Holmes and I are working together now and we're basing things out of Orleans and our little home office located above the main offices of Cape Cod Stone. Tim was a supervisor for a large design/build firm for the past few years and has been at things for a year or more now on the SunWind end of things. We were kind of put together by a friend who knew we had like minds and now we're rolling with it. I'm psyched. I always thought - or at least felt like - I was the only one around here (because in Vermont, the land of all that should be, they all think like this) who was all-in in this mindset of "we're just doing things wrong and somebody needs to fix them and that someone is us." But turns out, of course, I'm not. This is big news, or at least important, exciting news, and it's invigorating. I was talking to Karen, at the gallery, and realized how depressed I was getting while thinking about conventional building and all its misguided ways. But hopefully it's getting better. Horgan Associates Design/Build is rolling along with lots of cool projects coming up for the summer, but hooking up with Tim, sharing office space, full-on encouraging solar electric, solar thermal, wind turbine use, and geothermal heating and cooling is a great step towards fixing all the years of crap that have been taking place, getting people off of fossil fuels and onto alternative energy, and working towards leaving this place better than when we found it - which should be everyone's goal. Or at least it would be awesome if it were everyone's goal. I think the two of us combined are going to be a great source of good things to come. Keep an eye on www.sunwindllc.com . We're putting together a lecture series on renewable solar energies and peak oil, and we have big plans for bringing that talk out to the public around the Cape. We've both done solar thermal installs, Tim's way ahead of the game regarding pv's and turbines, and I'm the only IGSHPA (Inernational Ground Source Heat Pump Association, aka geothermal heating and cooling) licensed builder on Cape Cod, although others have been installing them since Roman times. Literally. Rome was heated - for free- geothermally, and we're not smart enough to all still use it today? Crazy. We have two small-scale roof-mounted turbines permitted for Truro already, a pv install coming up in Quincy in the next month, a renewables project in Ptown, another small-scale turbine in West Dennis, and Tim just finished a solar-thermal install in Truro a few weeks ago. Adding this aspect of work to your home is a no brainer. Call us even if you just want to talk about the potentials and we'll guide you through.

And hopefully our site, www.horganassociatesdesignbuild.com will be up and running by July 3rd. That's our deadline date anyway. (Actually, that's the deadline of when the magazine premieres in which we have an ad space taken out - we'll let you know which one later on.)

Big, long day today at the Museum of Science and its "Lessons from the Museum of Science Wind-Turbine Lab" - a lecture that was held in the skyline lecture room up above the Charles River in Boston/Cambridge. Lots of scientists, lots of engineers, few blue-collars, lots of white-collars, and lots of energy - pun intended - towards getting off fossil fuels. Good vibes all around. Two of the turbines we're selling and promoting at SunWind were amongst the tests done by the MOS, and both performed well. One was located in what turned out to be not-the-most-efficient-spot on the roof of the building, but still it performed closer to its specs than most of the other turbines on the roof above the Charles, and the other turned out to be one of the most efficient units the MOS tested. We also got a full-on look at a new vertical-axis turbine from Windspire Energy that was pumping around even in the day's low winds.


Why we aren't building better is beyond me. Knowing and not doing is even worse than just doing and not having a clue. Why we aren't building everything with renewable energies is also beyond me. You can still have a historic-looking Cape house and have it run on fully renewable energies. Completely. In fact, a Cape is one of the most efficient style houses you can build. If not underground, and if you build it tight and super-insulated, it can be fantastic. Sacrifice the granite countertops and foolish sinks, have a local guy make them out of concrete or wood, get rid of the tons of paint, cut out the crazy roof lines, get rid of the excess, useless wasted spaces, use water conserving fixtures, get your windows in the right places, provide thermal mass in the building to store heat, build smaller, build smarter, just build less. Buy less. Do less. But do less, build less, build smaller, buy less.....and do it smarter.