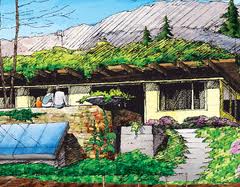 The past year or so I've been reading a lot of Malcolm Wells' books on underground building. Not bunkers and concrete safehouses, but legit, habitable, beautiful, beyond-energy-efficient underground homes. In many of his books, he talks about how when we build something (on Cape Cod, in New England, in most of the developed world for that matter) the very first step we take in actual construction of something...is to destroy everything standing in the way of that construction. Once the surveyors leave the site, once the drawings have been completed, once work is slated to begin, the very first piece of construction equipment that arrives is a bulldozer to knock down all the native plants and trees - only to be replaced by non-native plants and trees and green grass when all is finished (which really has no place on the Cape, especially), which then has to be tended to every spring with gobs of fertilizers (made from chemicals that have no place near our mouths or bodies in any shape or form) and water piped in from the town plants (when if we'd just use biodegradable soaps - which are actually good for us - we could pipe our grey shower-water straight out to our gardens). Once you destroy all the native growth and move towards tending a green grass and non-native plants, you're now caught in this cycle: the cycle of every spring having to devote a healthy chunk of money to buying all of this crap that has to be used to maintain this landscape. And hardly any of it is natural. And you have to buy it again, and again, and again....and again. The Scott's company is not a fan of organic gardening. (But I found out last night Agway in Orleans has fish compost, which is natural, especially here). But Malcolm Wells would say that taking care of the earth, befriending the earth around you, making that earth work for you, and returning the earth to its natural state - not green non-native grasses and non-native trees - was not only possible, but was perhaps an inevitability for the future. Agreed.

By the way....Malcolm lived in Brewster and you can still visit his place.

We - me, us, whoever and all who work with us, whatever you want to call it but I hate saying "I" because it's not about an "I" at all - have a geothermal heating and cooling license from the International Ground Source Heat Pump Association. The license cost a shit ton - that's a lot - to get and took two weeks worth of work time to sit through the classes and actually have a piece of paper that says it's official. We got it because heating and cooling is free. Or it can be, if we'd get out and off of the cycle of battling against nature and wrapping ourselves and out homes around it instead - literally, in the case of geothermal wells. By doing so, we can make the earth work with us and for us, and we can make our homes actually take care of us instead of us thinking they are taking care of us when in reality we're working against all the laws of nature by placing a home where we do in the first place. Malcolm thought this, and he walked away from a successful career as a mainstream architect to put his money where his mouth and heart were. It costs a lot to have a home here, a conventional home, and a large part of that is maintenance and upkeep. But we incur such high maintenance costs on our homes almost purely because we're working against nature instead of with it. Of course things aren't going to work or last as long as the manufacturers say. Manufacturers don't trump nature.

The point is...and if anyone actually reads this you're surely waiting for a point...the point is: take care of the earth, treat it with respect, build in accordance to what the earth wants, work with the earth not against it....and the earth and the land will take care of you. It's so easy...it's so friggin' ridiculously easy. Think outside the box, question the everyday things and how we build and construct dwellings, and work with the earth instead of against it. And read Malcolm's books. They're fun