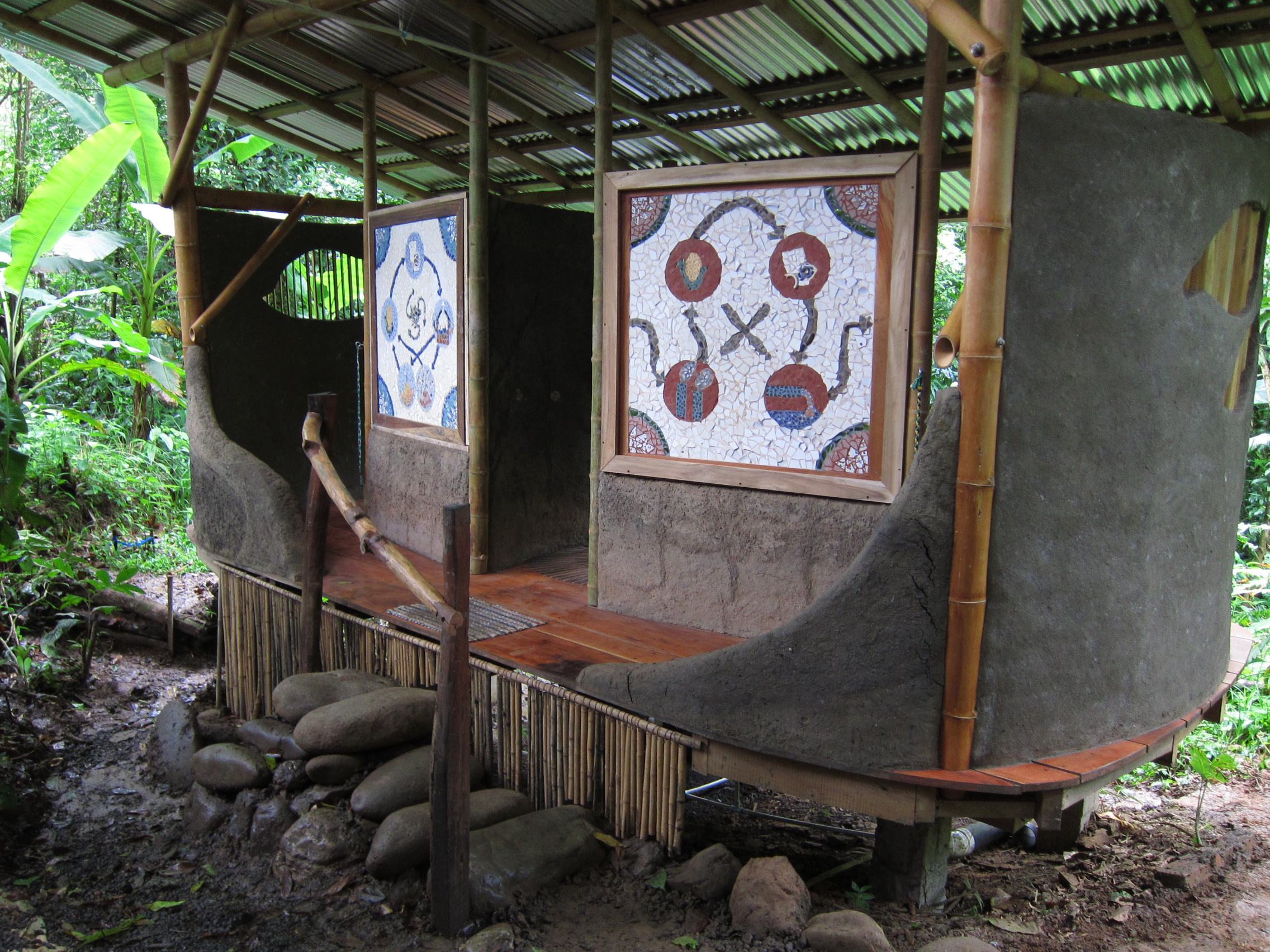 There’s a bright yellow chickadee and a male cardinal sitting right outside my window, both scoping out the public gardens for grub, pretty sure, and Peekay just ate a $20 steak that someone took two bites out of, decided they were full, and tried to throw away at the restaurant last night. Lucky dog.

In mid-March a crew of about ten of us from the States headed down to a little village in central Costa Rica. The primary reason was to spend a few weeks in Mastatal at Tim and Robin Ohara’s environmental and sustainable living center, Rancho Mastatal. You can learn more about the ranch and it’s magnificent-ness at the link, but here’s a quick overview: the ranch is located in Puriscal County, far far from the Americanized Costa of the Pacific coast; all of the structures on the ranch are built via natural construction using bamboo, locally harvested wood, and earth (usually in the forms of cob or wattle-and-daub); composting toilets and biodigesters are the norm; and renewable energy systems are just about the only way to go. Tim and Robin and everyone staying at or just stopping by the ranch promote sustainable living in every way imaginable, and they practice what they preach every step of the way. They walk the walk here, sometimes learning as they go, but fully committed to the cause.

Arriving at the ranch via a dusty, stand-up bus ride through the country and ridiculously sketchy and questionable roads with a fearless busdriver, the first thing you notice is that…well…it’s dark. Really dark. No lights. Electricity is fairly new to the village, and the transformer had been blown up a few hours before by lightning in the rainstorm. I like it. Skip and Lisabeth, who are leading our contingent, met me at the bus both with beers in hand. I like that too. Get settled in, dinner at the community table a bit later, and then a quick meet and greet with the other ten people in our workshop as well as the other twenty-or-so people living and working at the ranch. Early to bed, as we have only three days to scope-out our project, check out our building site and the surrounding parameters, and actually design our building and all that goes with it before we begin the construction phase of things. No rest for the wicked here. We’ve got ten days total to design and build our project, and weather is a big obstacle here, as well as numerous other distractions too (but also cool and tasty distractions). As for the early to bed, it’s dark at six pm, and the roosters start around four-thirty in the morning. Not to mention we’re about to put in a straight-run of ten-hour work days in 90-degree heat, which sure as hell beats working on Cape in twelve-degree cold and snow.

We have a choice of projects, but the main one that we’ve been asked to build is a compound of sorts for new composting toilets and the biodigester, which is the ranch’s source of methane for cooking all the meals. That’s right. Our stomachs were fed via methane produced by humanure and cow manure. Shit. Shit keeps everyone fed. It’s awesome. Basically, a biodigester collects human crap and all the good stuff we get rid of while reading the paper in morning after our coffee, as well as added cow manure from the farms around the village (which is all organic waste that can be utilized instead of washed away), and converts it into some of the best fertilizer in the world and biogas, which is utilized as a source of heat energy for most of the world. So there’s no need for any type of toxic fertilizer bought in bags that ruins the earth anyway, there’s little pollution (methane from all the crap in the world is the largest contributor to greenhouse gases) venting freely into the atmosphere and ruining our ozone, and….it’s cost free. Totally free. No paying a propane guy every month, no big oil tanks in the basement, no truck driving all over the countryside burning fuel to get you your fuel, no electric stoves burning for half-an-hour to make hot water. It’s free. And very, very smart. Funny thing is, they’re pretty easy to build. While we pay tons and tons of money to have intense septic systems that take all our waste, pump it through huge tubes in the ground all the way to some processing plant that is itself burning tons and tons of energy to operate 24/7 only to then dump the “clean” (well…hopefully clean) water into a river or ocean of some sort (and all so we can tap a little handle every morning and not think about anything else after that), this little ranch with it’s biodigester is using all of it’s and the cows in the neighborhood’s waste, confining the breakdown process to a handbuilt, 5’ diameter tank in the ground, and using the organic matter and gas left behind to fertilize the ground and all the banana and coffee trees, as well as operate a gas stove directly inside the ranch to cook all the food grown on site – food grown with the fertilizer from the biodigester, food which we then eat and then again turn back into waste after our morning coffee. It’s a perpetual cycle of healthiness and happiness.

I learned more and more about shit and waste than I’d ever imagined on this trip, and we really have some huge hangups about this topic in this country. We basically ignore it. Don’t talk about it. Tap the little flush handle and forget about it. I knew a little about compost and composting and all it’s joys and benefits from lectures in Vermont, but now…

So, our project entails designing and building a structure that will encompass two composting toilets, a sink for hand washing, an old composting toilet that is already on the site that will continue to serve as the hopper for feeding the cow manure into, and doing all of this in ten days, all the while using only local woods found on the site, earth, and ingenuity and creativity. And it has to look cool. Not just cool…it has to look awesome. Inspiring even. You have to want to sit in this structure and do your thing. And there’s no running to the lumberyard or hardware store for materials. There are no mistakes ruining a piece of wood and just grabbing another to replace it. There are no new fandangled construction materials that have just been put on the market that claim to be the greenest and bestest thing ever and paid huge money to be advertised on the inside cover of JLC or Fine Homebuilding. We use what’s on the farm or what the neighbors will let us borrow, and that’s that. I think our biggest, easily-recognizable score probably came in the form of the small box of six-inch timberlok screws that we found in the toolshed, but that’s about as lucky as we got. Still….timberloks….sweet score.

After another meet and greet, a little more in depth with some stories and scars, we learn we’ve got a sweet crew working together: a few architects, a few architecture students, a few designers, a furniture-designer/kick-ass-mom-to-be, a homesteader, a few builders, a mine geologist, and just general awesomeness. And we know you can’t stop awesome, so we’ve got a good crew. In the classroom, we spend two intense days quickly sketching, discussing, drawing, laying out, mocking up, measuring, discussing again, etc, etc, etc…. Not one argument. Not even a hurt feeling. Ten people, who’ve known each other for two days, sharing design ideas, critiquing each other’s personal thoughts, really spending some intense time together….and not one argument. Two experienced builders would be at each others throats just on how to lay down a floor….but we rocked without a hitch even. On the third day of design work, we present our proposed design to Timo and Robin, as well as the rest of the ranch and opened the floor to discussion and questions from everyone. Some technical questions, some design questions, lots of admiration for our proposed work, and lots of excitement to see how the hell we’re going to build it. Some thought it represented the golden mean, some thought it looked like a human bum in the floor-plan view, and everyone thought we meant for those things to happen. Truth was, we just liked curved walls…so we did them.

There was a lot to learn about building in the jungle, and my own learning started with the schedule. I sat down after our last design meeting and began to make a schedule for the work – not an official schedule, just my own, because I could see we had a lot to make happen in a very short amount of time. Skip told me I was going to find that everything happens muuuuuuuch slower than I’ll expect. I think in my schedule I had the roof being put on by the end of the third day. Well, we just made it getting the roof on by the end of the week, actually. So my schedule flew out the proverbial door, and that was a great lesson. We had things we needed to accomplish every day, and we put them on the board each morning, and almost all of the time we managed to accomplish everything on there by sunset and darkness. It was a pretty amazing effort. Architects who’d never used a worm-drive before were cutting teak beams; people who’d never built with a standard pine 2x4 were cutting intricate joinery into round bamboo poles; we made great details out of simple materials and natural wood; people hung off rafters four inches thick about twenty feet in the air to install a metal roof; the girls built a freaking toilet completely from scratch out of wood and cement; we (giulia) designed louvered walls with leave motifs in them; we all used clay, straw, and manure to make walls; we all kicked ass. It was amazing. We worked all day, met each night to go over what we’d accomplished, tweaked a few design aspects every night, and then hit it again first thing the next morning in a mad dash to finish as much as we could before deadline.

In the end, we didn’t quite finish the entire project…but in that environment it all works out. We managed to get the walls up, the roof on, the floor down, and readied everything for those staying behind on the ranch to finish up our design. A few weeks later and the structure is almost ready for full use now. A large structure, built from natural materials found around the town (Need more wood? Walk around town and ask who has some!), two composting toilets, a pretty incredibly thought-out design enabling all of the components to work together with the sun and the biodigester to make the fuel used to feed the ranch. Recreate. Food → Waste → Fuel → Fertilizer → Food. A completed circle of life. And the best part – apart from fixing the planet a little, helping the ranch, reusing one of the most harmful greenhouse gases to help feed the world, doing it with natural, local materials, learning and learning and learning – was the people we did it with and for. Just awesome.

And you can’t stop awesome.