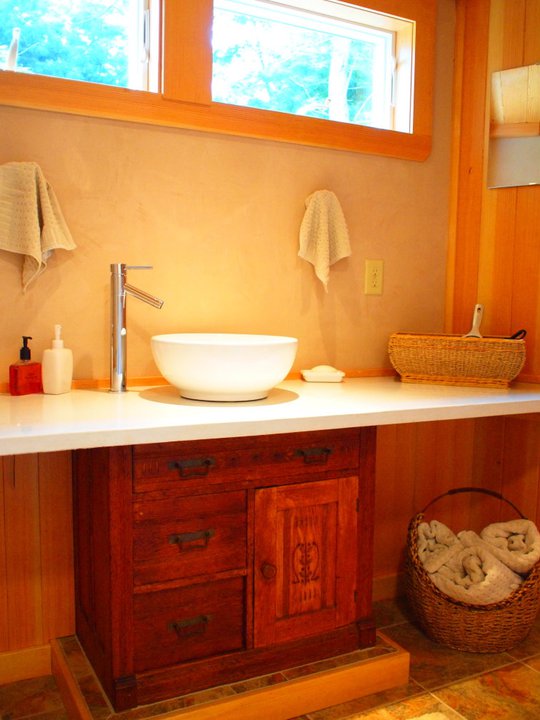 As part of our philosophy on building and design, we’re constantly on the hunt for ways to streamline the already-too-complicated process and far-too-often-unnecessary, expensive, and often unhealthy aspects of design. We’re inspired in part by Frank Lloyd Wright’s work on his Usonian houses and the methods and philosophy he incorporated in designing and building those structures; namely that “people actually derive countenance and sustenance from the ‘atmosphere’ of the things they live in or with. They are rooted in them just as a plant is in the soil.” Usonian homes were designed to be “a pattern for more simplified and, at the same time, more gracious living.” As part of this simplified process, paint - and all of its complications and time costs - was altogether eliminated from the homes, thereby saving copious amounts of both time and money for the homeowner.

The idea of painting a home is one that many homeowners assume is just part of the process. Nevermind that painting the exterior of a home is, in our opinion, one of the largest money-wasters available in all of a home’s construction (and a subject of another writing entirely), the process of painting the interior of a home is also an idea that now needs to be rethought. Painting – just the painting of alone - an entire home’s interior adds tens and tens of thousands of dollars to the cost of construction, and many weeks – if not months – to the construction timeline of a new home or renovation. Add to that the process of hanging board on the walls, the taping, the mudding, the labor crew of mudders or pasterers, and then….the sanding of all those walls. And then add to that the abysmal mess during the sanding process, the days and days of dust flying around the home while men in masks run broom handles with sanders attached to the ends over the walls, filling them, smoothing them, building them up only to sand them down again in preparation for the first coat of primer…it’s insane. If part of a renovation, prepare for the entire home to be covered in dust. Yes, there are new-fangled products out on the market and advertised in every building magazine that claim to stop the flow of dust from one room to the next. They’re made of plastic, used only once, hung from ceiling to floor and taped down as best as possible, and then wrapped up and tossed into the dumpster to be thrown “away”, adding to the pile of unnatural trash building up in the driveway, then the landfill, then the air and the waterways and the ocean. And they don’t work. Dust is dust, and it will find its way into every nook and cranny imaginable, including the airways of the guys doing the sanding. This is all in preparation just for the process of painting, which means another crew in after the sanding to sand again, touch up the missed spots, add their own coat of primer, and then two, three, maybe four coats (if it’s red!!) of more paint. And try reading (or even finding) the ingredients in those cans of paint. As said before, this whole process adds weeks and months to the project depending on the scope, tens and tens of thousands of dollars to the cost, and tons and tons of empty paint cans and plastic to the landfill. And where does 99% of the leftover paint in the paint trays and cans go once the painting is complete? Usually washed down a drain to go to the sewer system, “cleaned”, and then reinserted into our natural waters….if it’s not just dumped into the woods on the side of the house or thrown “away” behind the largest bush.

We’ve always been interested in natural building, and as part of this started experimenting with ways to eliminate the before-mentioned process, headaches, mess, and costs via using natural clay plasters. Natural clay earth plasters are non-toxic (they’re the earth!), environmentally friendly (no dust and toxins blowing around the air!), time-and-cost effective (eliminating the entire steps of sanding, priming, painting, sanding, painting, sanding, etc, etc…and the painting crews and labor that come with all of that!!), waste-free (have some left over? Store it for years, add water, and use it again….or pour it back into its home outside your yard…it’s the earth! Go to your home!) and, just as importantly, they’re absolutely beautiful. They come in a plethora of colors and can be finished in any texture imaginable (though we have our own preferred finish). A room filled with natural earth plaster is a room that feels like it’s living and breathing with you. You want to touch it, you want to feel it, and you’re definitely drawn to it. It’s comforting, it’s calming, it’s natural, and it’s as healthy as you can possibly imagine. No offgassing, no fumes for weeks and months afterwards, and no mess. Spill some on the finished floor during a remodel? No need for turpentine and mineral spirits and scrubbing with a toothbrush; just get a paper towel and some water and wipe it up. Done. A whole house can be done in days, an addition in two days, a room in hours….and then that’s it. Done. Not weeks and months. No sanding, no priming, no sanding again, no painting again, no sanding again, no painting again, no sanding again…and virtually no clean up. There’s no waste. No cans in the dumpster, no plastic paint trays thrown away after one use, no toxic marshes behind your home….nothing.

We’ve been playing with earth plasters for awhile. We’ve just finished a new bathroom (did we mention that because it’s clay, it’s incredibly suited by its very nature for high moisture environments) and we have a full basement renovation coming up next all to be finished with earth plaster, cutting down on time and costs and virtually eliminating the mess and waste. Combine this method of wall finishing with natural wood trim and you’ve eliminated the need for, the maintenance of, and the cost of painting. And painting the first time only means you’ll be painting again in the future.

Interested? Call us to come take a look at how we’ve used it already (and in the process see what is undoubtedly the coolest 25 SF bathroom on all of Cape Cod) and check out American Clay Earth Plasters online (www.americanclay.com). We’re not shilling for them in any way. They’re not giving us any bucks to promote them. And though not the only earth plaster out there, it’s what we like best, and it’s what we are using and are going to try and use on every project from here on in. Got an idea for a renovation? It will be one-hundred times better finished with a natural earth plaster as opposed to paint. Promise.