Summer Doldrums…what to do, what to do… 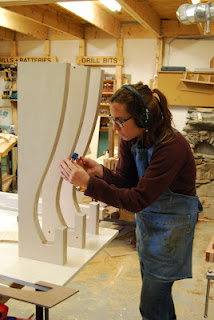 Flat surf all around. Nary an offshore breeze even in sight.

People don't want us working near their houses right now because all seventeen of their long-lost 2nd and 3rd cousins have just mysteriously dropped in...and are refusing to leave until Labor Day.

It's a billion-and-one degrees out and sleep is restless - and gross and sweaty - at best.

Peekay is not a happy job-site dog in this weather. I suppose having a massive mane of blonde hair wrapped around your neck all day isn't so great in August. January, yes. August....for sure not.

And the beach - the best beach - is closed for the birds. Tough call - they were here before us, but no one blinked at taking $180 and then closing it the next day. Ce la vie, I guess...the good swell comes in September anyway.

But....the Jersey Devils are here. And that's where we (I) shall go, to break the doldrums.

The Jersey Devils are my favorite architects. Not so much for the actual things they build, although they are all insanely cool, but more so for their attitude and means of designing and constructing. They're a group of friends - some architects, some builders, some designers, all awesome - whose work involves all kinds of cool materials (which is nice for us to get away from our tendencies to use the same things, every day, that are just immediately available at the lumberyards), lots of positive attitude-ness, careful attention to how the design and build affect and is in turn effected by the environment around the project, and a tendency to push the boundaries of conventional design/build.

Just as things were beginning to hit their usual month-of-August dwindle, my architect buddy Ryan called me up and asked if I was going to go to this workshop being put on by the Devils. Ryan and I met at Yestermorrow probably two years ago when we ended up in a class together and as roommates for the week too. He was there having just finished architecture school and wanting to learn more about the actual construction/building of the physical things he'd been drawing forever...and I love Yestermorrow for a million reasons, but largely because it reminds that I love building because it's about creating and designing things to help fix the world and improve on the way we are currently doing things. Living on the Cape - in an environment of lots of second homes and second-homeowners, where work comes in spurts and you're out of control busy for months and months...and then nothing...and then out of control busy again for months and months...and then...etc, etc - it's easy to get trapped in the business/financial aspect of things, and kind of because you have to. But, that's not why we love building, or why I love building. In fact, it's what I hate most about it. (I've always said that if I ever win the lottery, I'm just going to become "favor guy"...like, I'll show up at your house, ask if there's any favor that could be done to make your life easier today, and then do it for free. That would just be the best. Need a swingset built? Done. Want a new deck? Done. Always wanted an awesome outdoor shower?? Boom. Done.) Unfortunately, the business end is a big aspect so you do the best you can, but it's not the cool part of making something for someone. I don't get much satisfaction out of a paycheck at the end of something, but I do get an absolute ton out of seeing people's reactions, knowing they've become friends, and knowing that they utterly are in love with what we've done, and usually because we've thrown our own creative twist into it - something they've never seen before or imagined could be done. That's why I love building. Because I know that what we're doing is helping somebody's life become easier, become better, in some way.

Anyway....Yestermorrow reminds me of that, of why I love to design and build stuff, especially after having come off a very busy, busy winter season where we worked a lot, all day, most nights, six/seven days a week. It's time to recharge the batteries and look ahead to this fall's/winter's/spring's upcoming projects. So, even though it's August and surely not any cooler in the Green Mountains of Vermont; even though it's nearing the end of a Cape Cod summer and people I love will be heading back to the real (so fake...) world and their jobs as teachers and financiers and construction workers and parents-not-on-vacation; and even though I love white sandy beaches, salt water and waves more than anything in the world except my dog.... I'm off to Vermont this Sunday for two weeks and an amazing opportunity to go learn from the Jersey Devils and construct a community design/build project for the town of Warren, VT. It's going to be awesome, it's going to be fun, it's going to be an incredible learning experience, I get to hang with my old buddy Ryan and talk architecture and building, eat great local food, talk to my pal Monica about the world, and I get to swim in the swimming hole across Rt. 100. Naked.

And then, hopefully there will be no more doldrums.