Keeping The Old Home For A New Family on Whig St, Dennis, MA 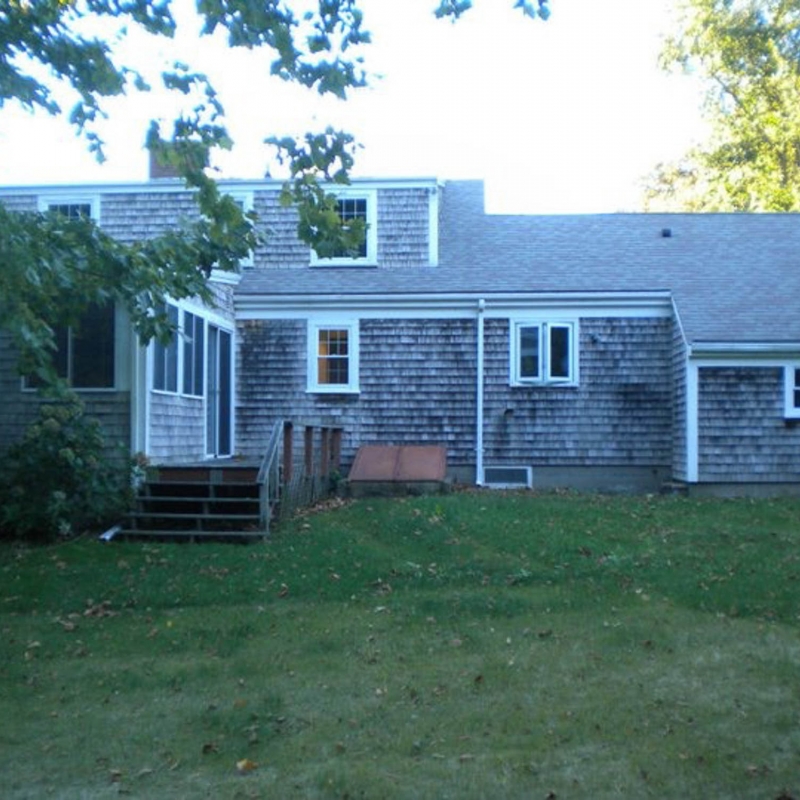 In late 2010, Jane and her mom together purchased this home in Dennis. The house was a bit of a landmark in the sense that it had been owned by the Walker family since being built in 1945. When the home came on the market, Jane and her mother were the only people who moved to purchase without the intent of razing the home and building a new one; rather, they hoped to remodel and update the home, but to do so in a way that would make the Walkers proud that they had sold the home to the right people. And be sure, they did.

We initially began with the ideas and plan for a modest renovation that would accommodate both Jane and her mom and Jane’s two children who would return for the summer. Just after Christmas and just as work was beginning, Jane’s mom unexpectedly passed away. The home that they were to share and which we were remodeling now took on a different meaning to all as well as a different scope. Work slowed for a while while the family mourned and regrouped, but when it began again there was most definitely a desire to make Jane’s mom proud that she had chosen a beautiful home for her family in which to place roots.

The once-fully-carpeted home now features dark-walnut stained white-oak floors throughout; a new family-room addition off the rear of the home; a new kitchen; two new bathrooms with custom concrete countertops; a large European-style master shower featuring distinct concrete inlays and shelving; three fully-remodeled bedrooms; all new windows with 6-over-6 double-hungs on the face of the home to meet Historic concerns, and large awning windows on the rear of the home for a more modern feel as well as allowing for a steady breeze even on the rainiest of hot summer days; a large new white-cedar deck and outdoor shower off the rear of the home; lots of gorgeous landscaping featuring the old oil-stained asphalt driveway being replaced with an oyster shell drive, native grass replacing the old invasive species that required lots of watering and lots of mowing, a beautiful bluestone sitting patio outside the front entryway, and lots of plantings including hydrangeas, azaleas, and blueberries (around the outdoor shower…blueberries love that space).

Although lots of major obvious items were renovated inside the home and out, it’s really the little details that make this house more of a warm home now - the changes in ceiling materials to denote use spaces; the light boxes that lead up the stairs dimly lighting Jane’s mother art collections; the carefully thought out placement of lighting fixtures and lighting areas; the custom concrete countertops that fit their spaces perfectly; the sight lines of the new open spaces that make a small little home feel much much larger than it is; the beams in her daughter’s room, cut from an old Vermont barn’s beams for a University of Vermont graduate; cabinet knobs made from stones found on Corporation Beach during a dog walk…

This was a great, beautiful project. It truly was. Jane gave us a lot of creative freedom on this home, and I hope we made her and the Walker family proud. Though every little decision was ultimately made by her, she trusted us to move things in the right direction and to make the decisions that would be best for her, for her family, for her neighbors, and for the family who owned the home before. These weren’t just idealistic considerations; they were very real considerations. And they exactly in line with how we’d like to do all of our work.

The best solutions are usually found during a walk on the beach...

Laurie’s cabinet door knobs, all found during a walk on Corporation Beach. Actually, the whole idea was conceived and found, start to finish, within ten minutes of that walk. 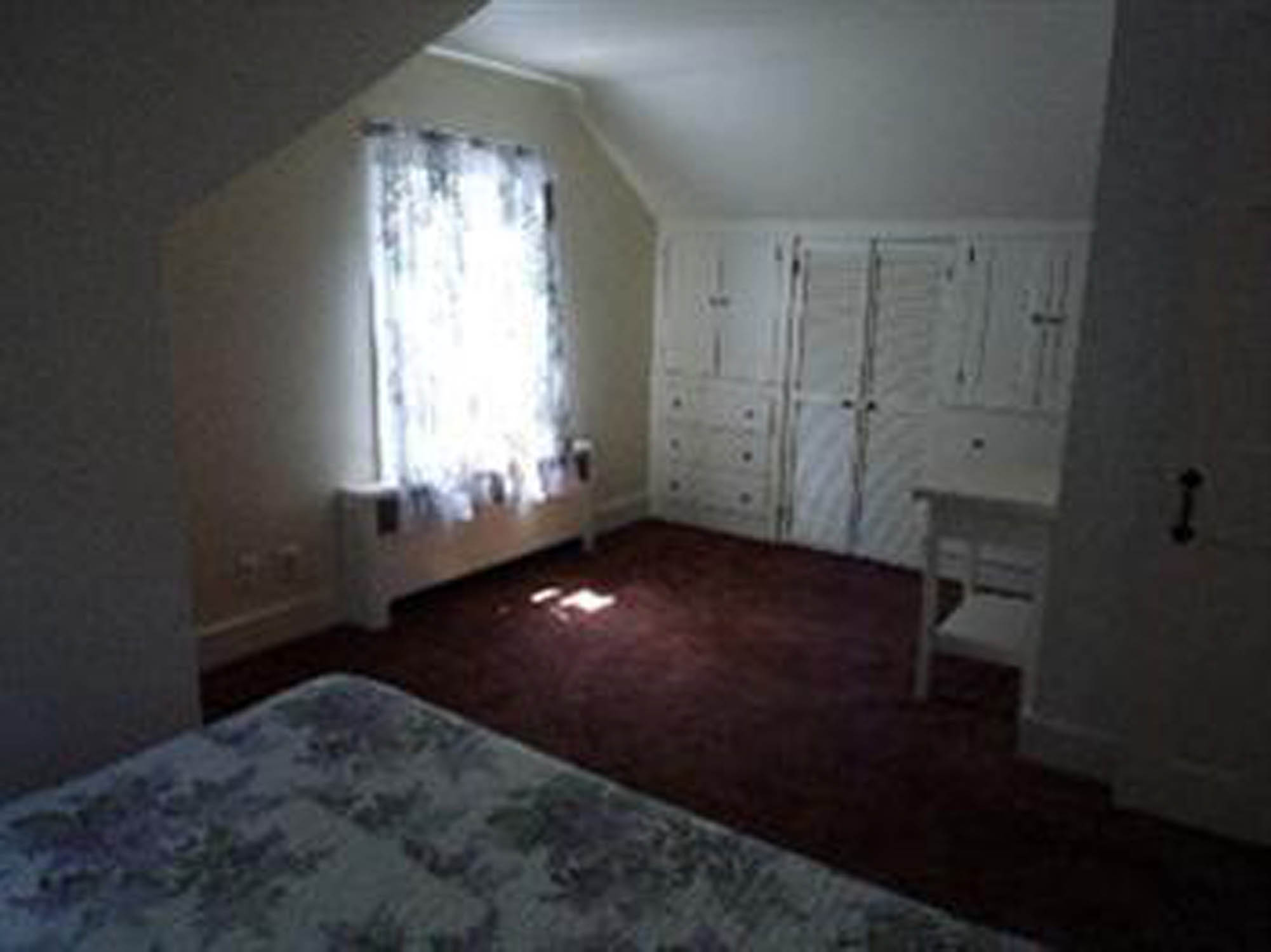 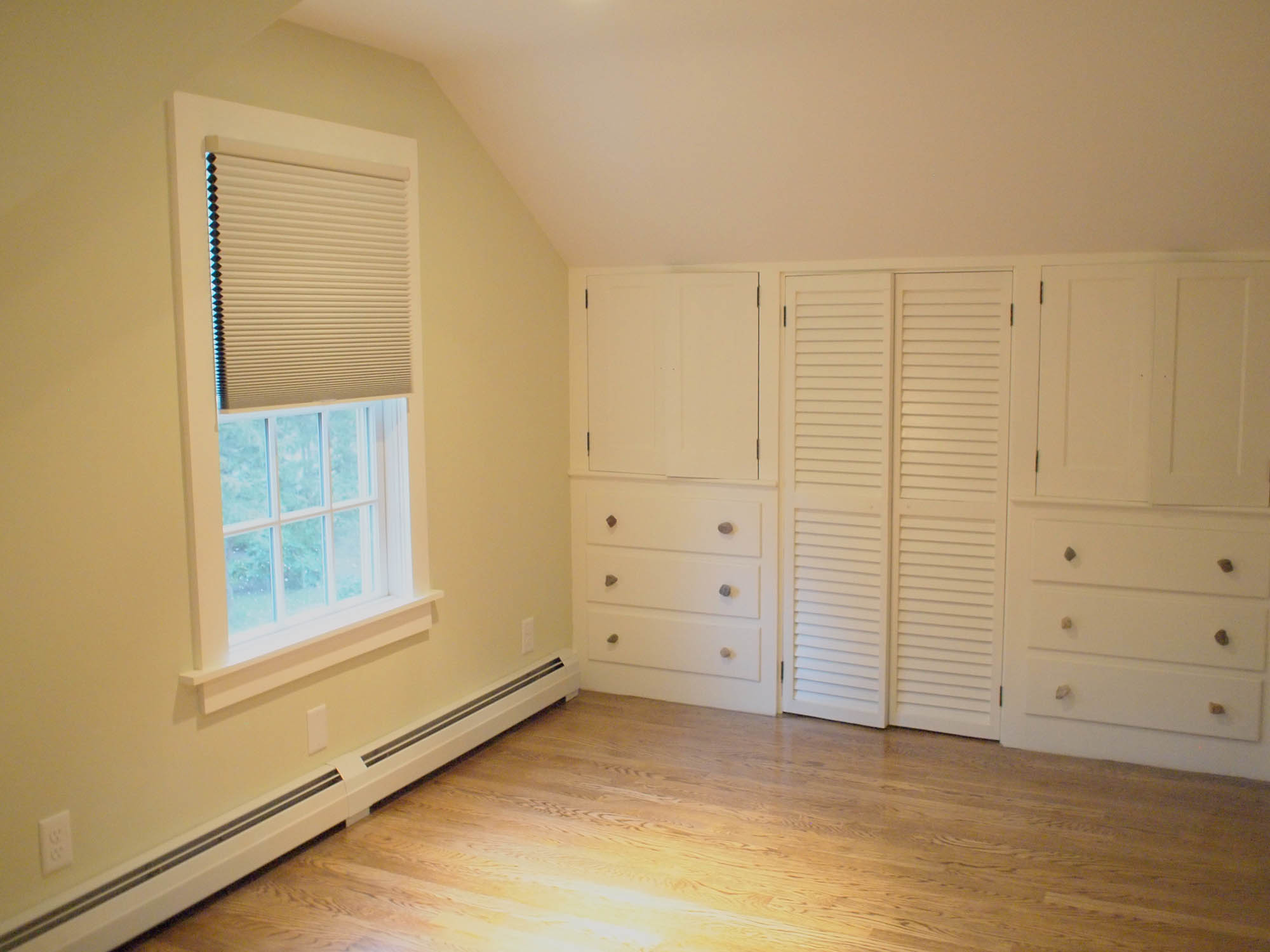 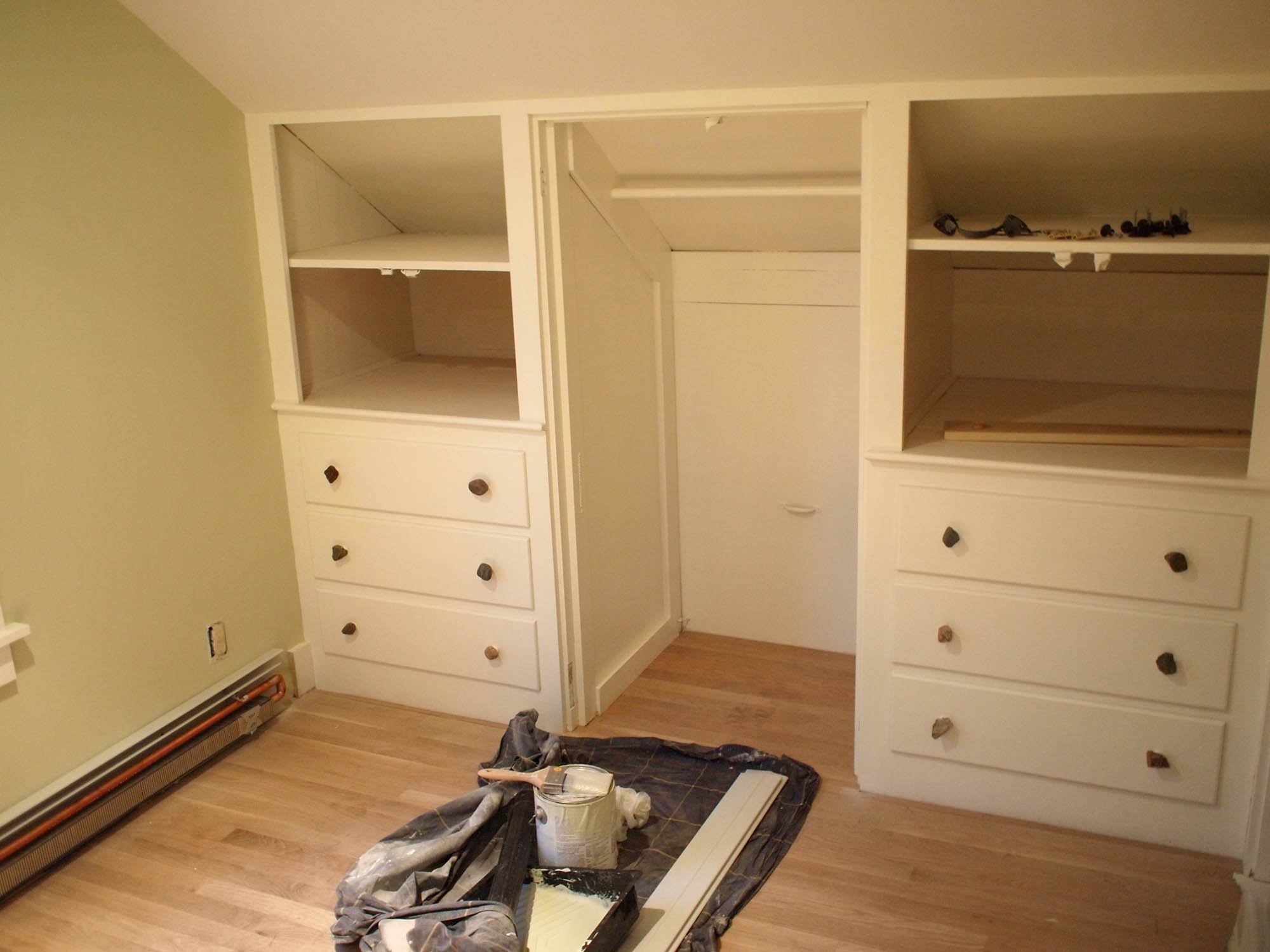 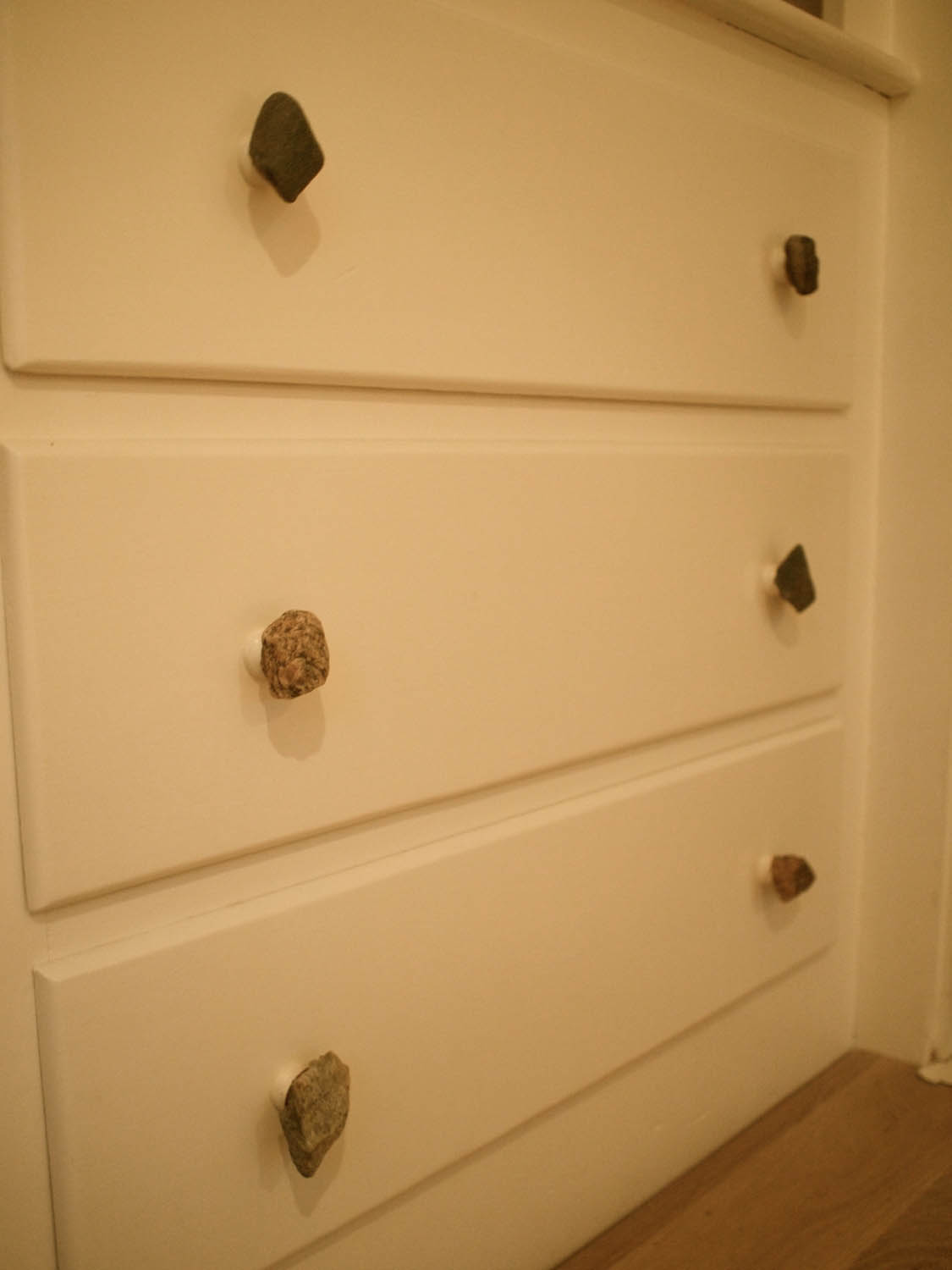 We love decks. Who doesn’t? For almost everyone who visits the Cape or who lives here, the Cape means outdoors. And it should. Even for us hapless souls who brave it out year-round (because September and October - and sometimes November even - are really, truly the best months to be here), we spend as much time outdoors as possible.

But…we don’t like plastic. I cannot for the life of me understand why people put plastic on their decks. A few weeks ago I was invited to a seminar on decking materials. It was a big to-do in a large conference room, orchestrated by a good friend’s lumber supply company and put on by the manufacturers of a leading plastic-and-composite decking company. It was a cool presentation. Free drinks, free food, lots of cool builders and people to chat with and catch-up with. I love that stuff because I love sharing ideas and thoughts with people - hence my love affair with Yestermorrow - and I hate the secret world of building. People should know. Anyway… we made it through all the marketing aspects and the hoopla of “selling” this material and decking to clients, market-share, profit margins, etc, etc. Enthralling stuff, really. After that was all done, we could walk around and check everything out, which I did. Finally, I came to the last table with all of the sample materials of decking, and after a little chit-chat with the salespeople about the benefits of the material, I finally smiled and said, “So…how hot does this stuff get in the sun??” And they all just stopped. Immediately their expressions changed and I kind of laughed a bit. They said, “Well, it gets pretty hot actually.” to which I replied, “you can’t walk on it barefoot, can you?” and they said that no, that wouldn’t be a great idea. It’s plastic, and it heats up to the beejezus in the sun. Which…was exactly what I was getting at. End of conversation, end of presentation.

Why, in a million years, would you build a big awesome deck for summertime use if each and every time you walk out of your house to go out on your deck you have to stop and put shoes on?? It’s akin to going to the beach on a hot August day, and you have to wear shoes to walk across the sand in order to get to your beach spot. It’s just too hot.

A few years ago, when this stuff first came out, I was hired by someone to build a large deck off the back of their house. The rear of the home was West-facing, so it got belted with sun all day. This deck was really the highlight of the home though. It overlooked a pond, and there were three six-foot glass sliding doors that let you enter to-and-from the house onto the deck. The project came out really nice. It had a large fanned-staircase leading off of it and into the landscaping…really nice stuff. One month after completion though, the homeowner said that the deck was so hot it was unusable, that you couldn’t even touch the railings they were so hot, and the heat coming off of the deck from the sun’s reflection onto the house was making the interior space unusable too, as well as mutilating the exterior siding. She said you couldn’t even be in the kitchen without wearing sunglasses. So….that was my last - and actually only - foray into plastic decking. I’m very leery and suspect ever since.

We use white cedar for all of our decking. It’s half the cost of mahogany, and it’s not poisonous like pressure-treated lumber (which is a whole ‘nother ball-of-wax too….imagine walking barefoot on rat-poison, copper, cadmium, nickel, etc, etc…that’s what pressure-treated is). The white cedar ages just like the white cedar shingles on your home will, and eventually it will all blend into nature like it’s supposed to. Sometimes we leave it natural with no treatment, sometimes we use a Vermont Naturals treatment that lets the wood color, and sometimes we use Benjamin Moore Arborcoat, a great translucent protectant that will also let the wood age but protect it from water. Depends on the situation and the client’s wants.

Build the best house you can, and then make it invisible. 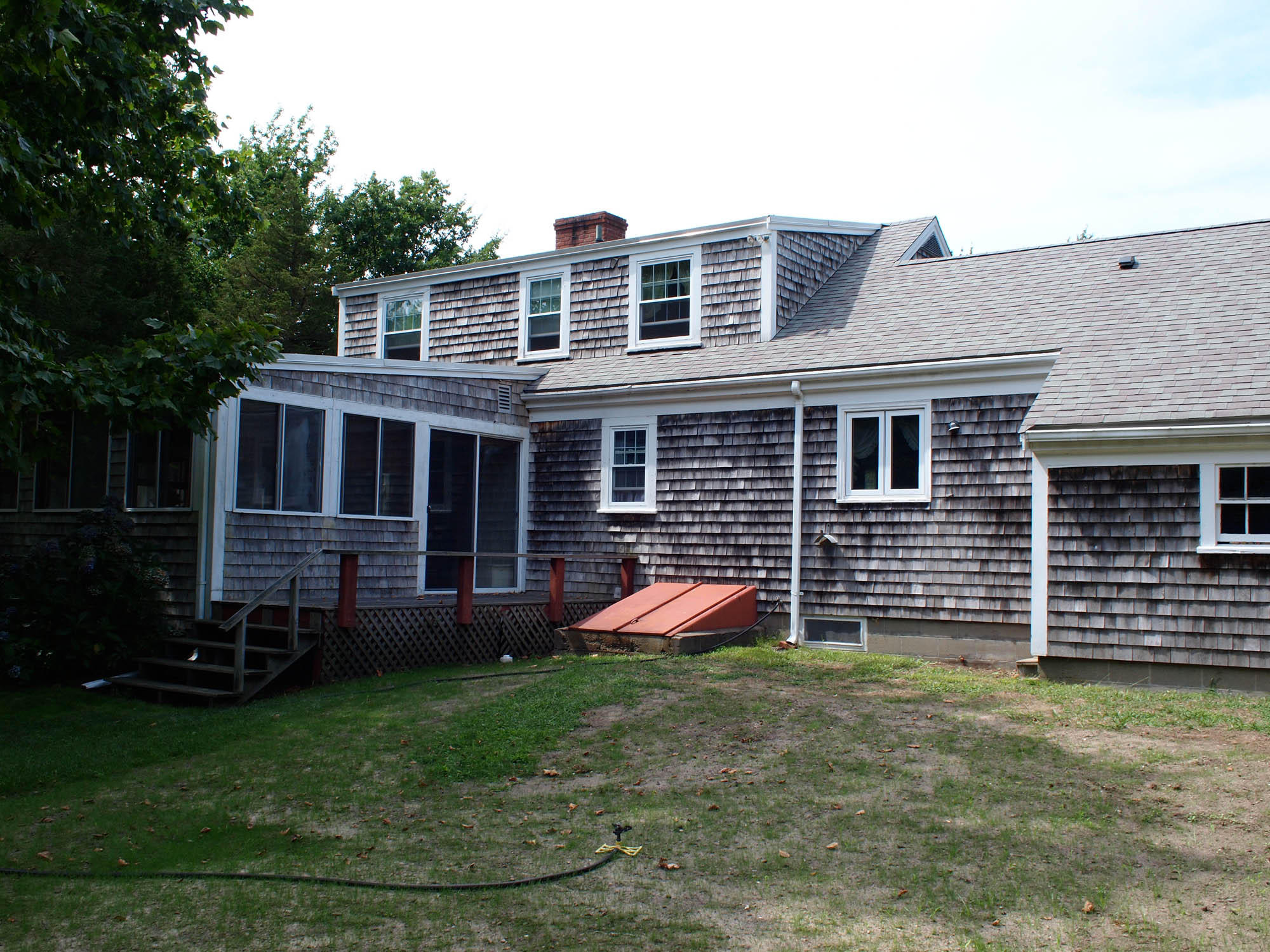 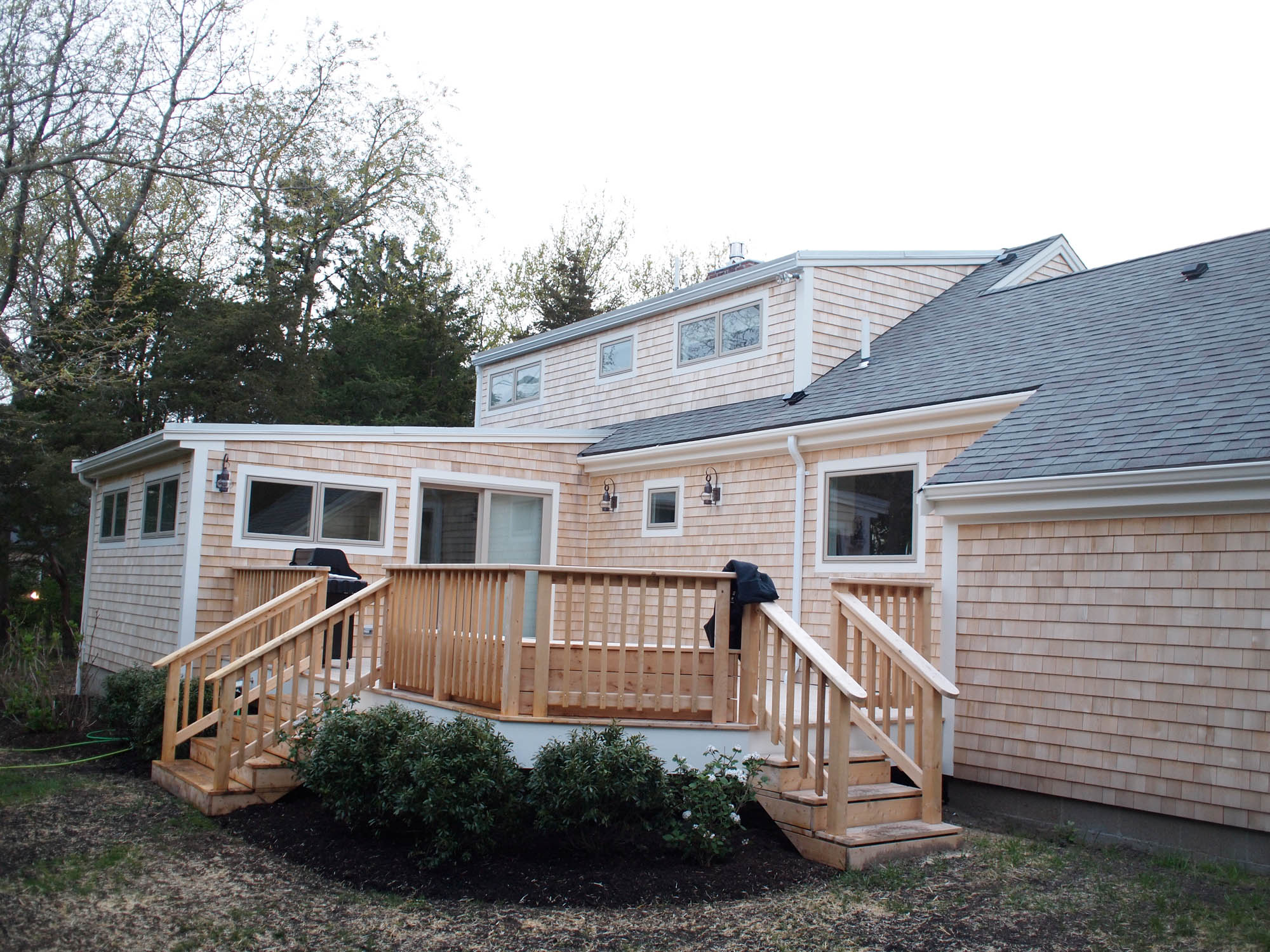 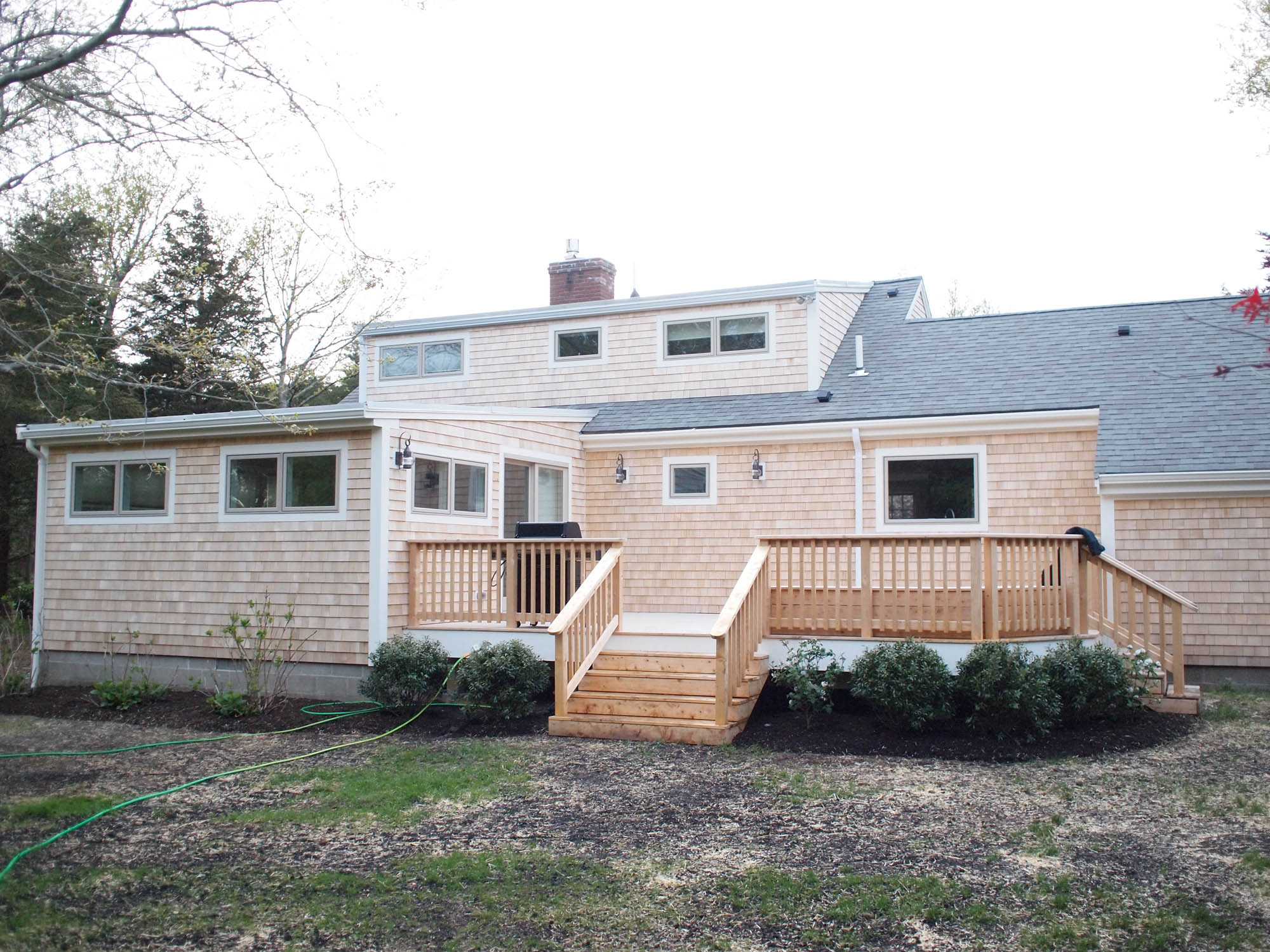 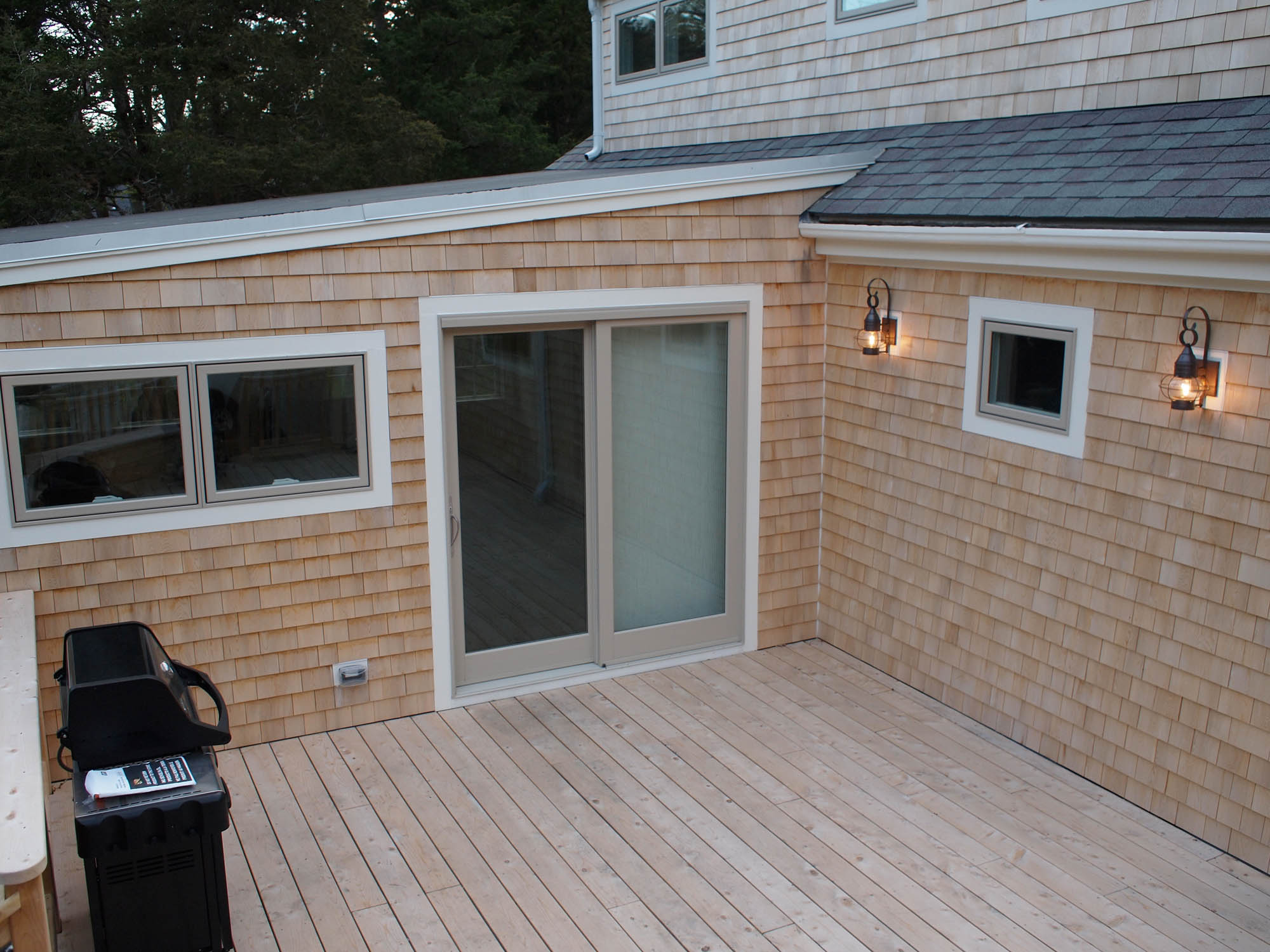 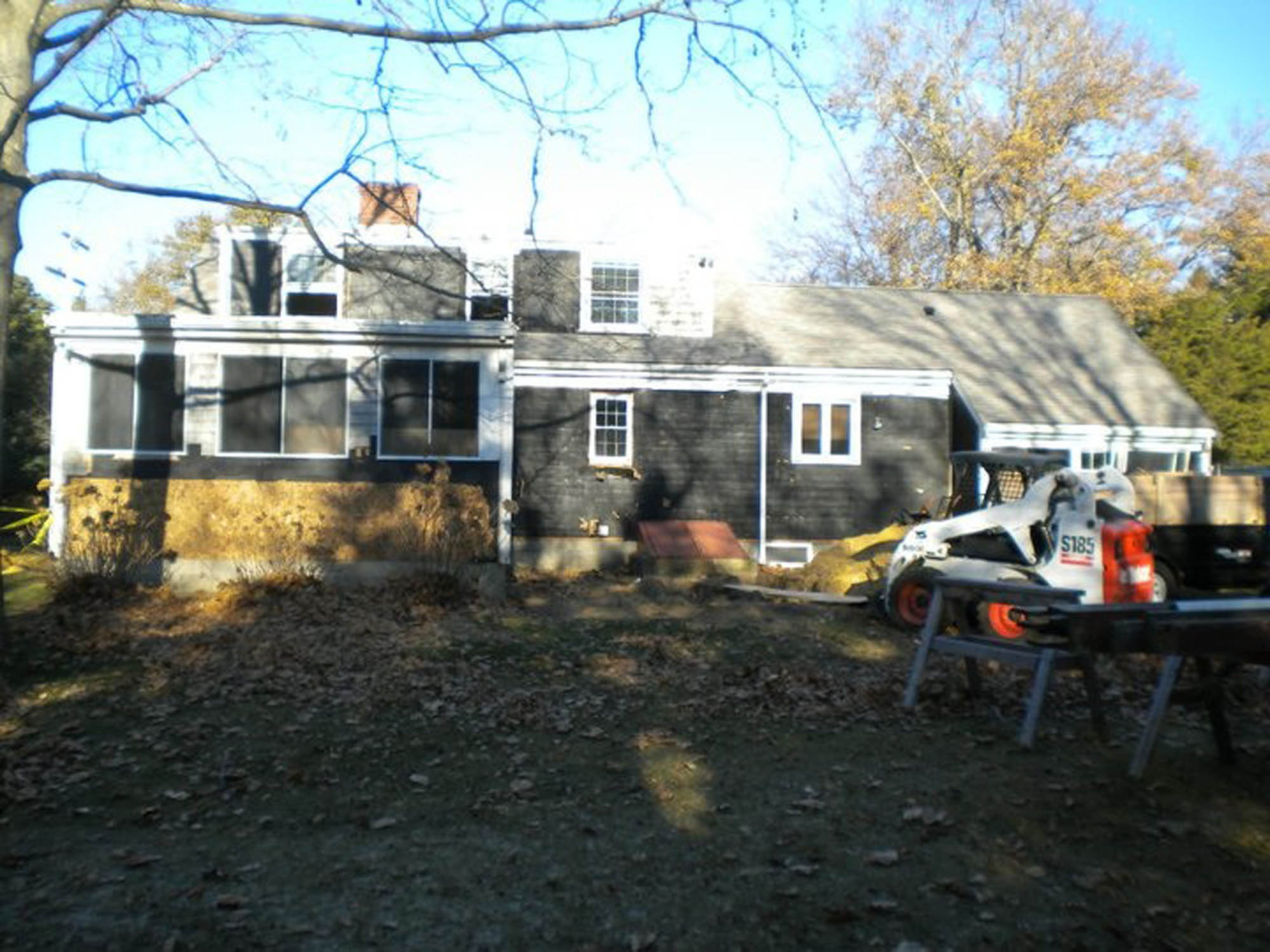 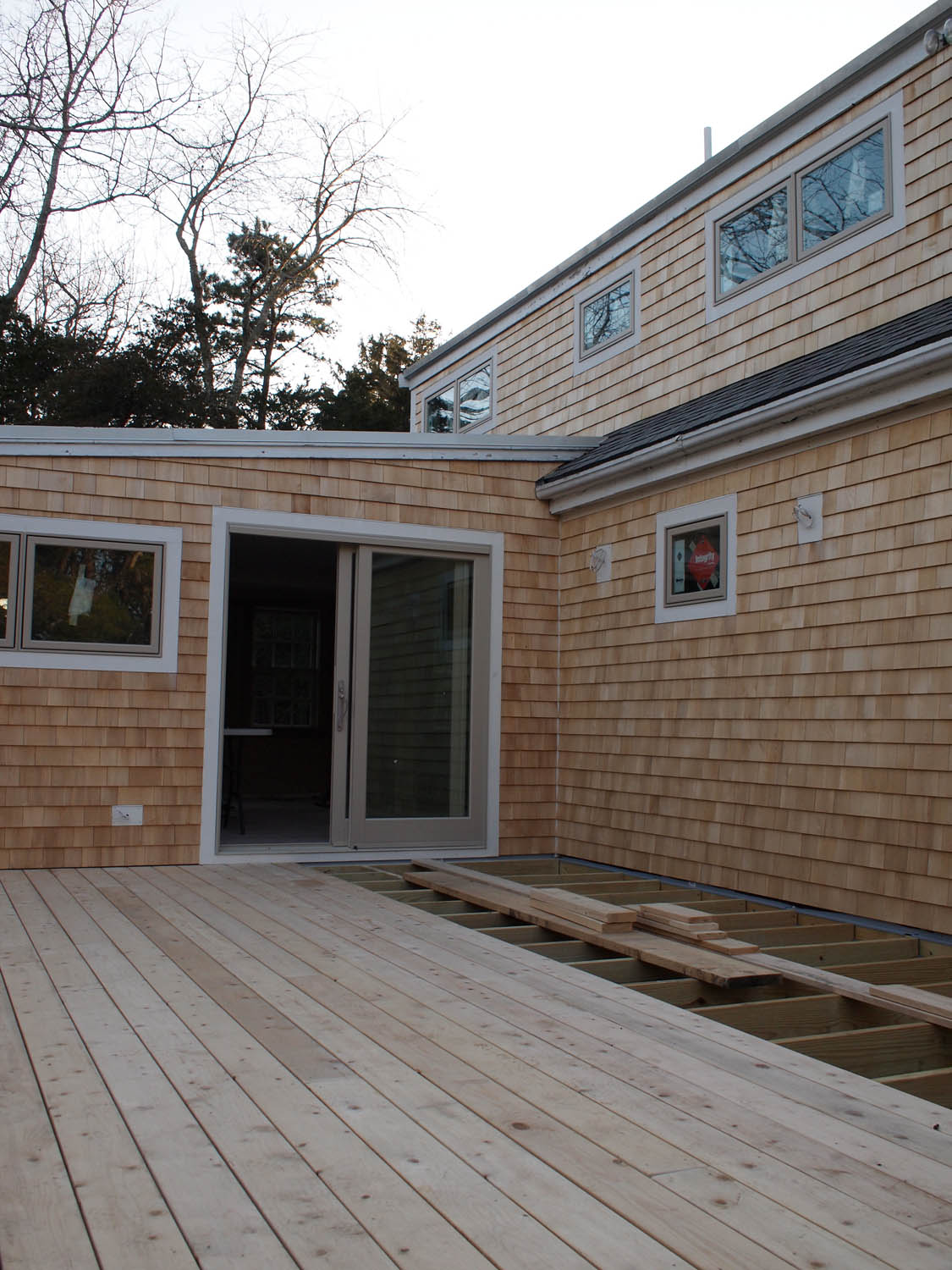 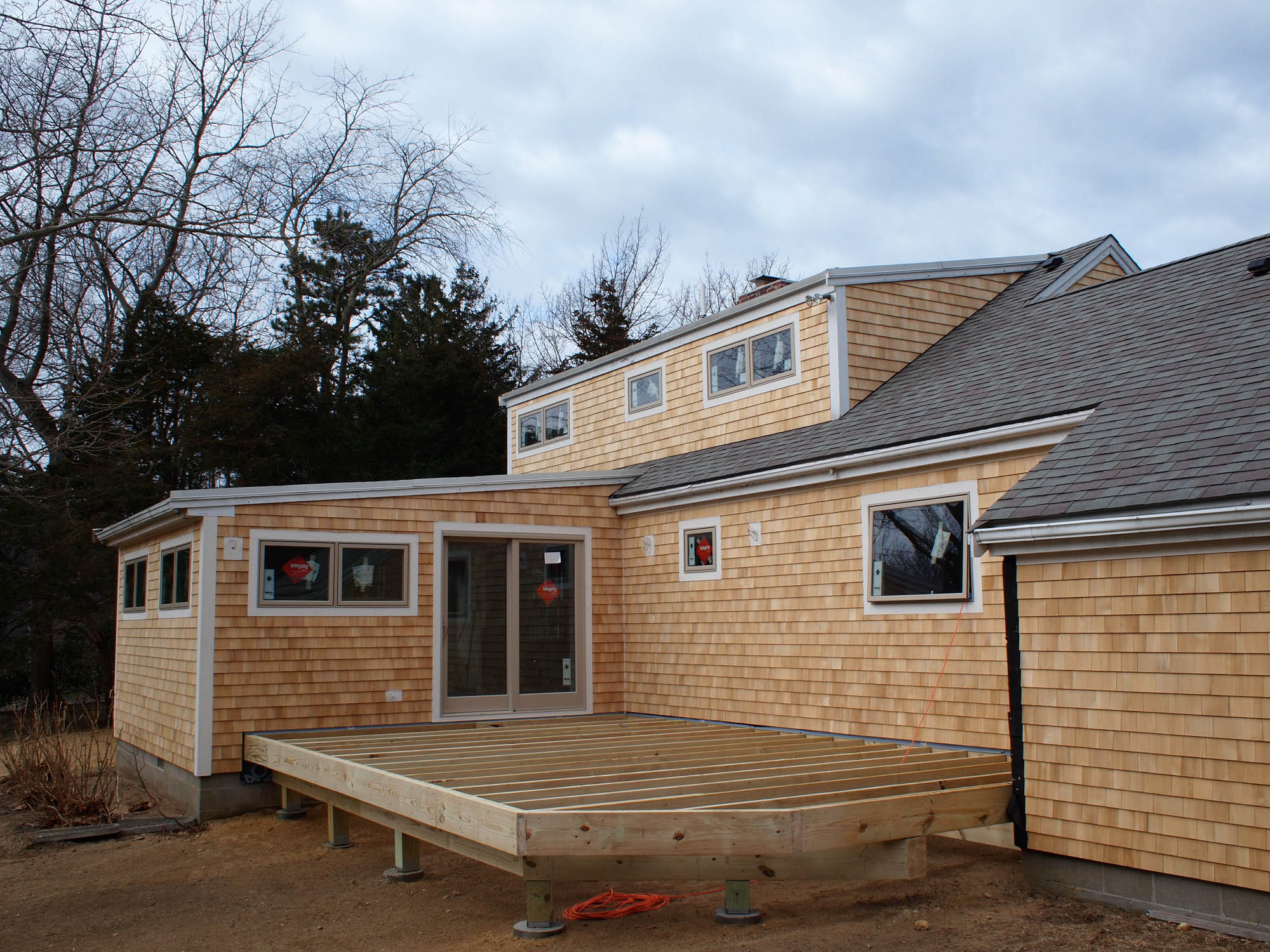 It’s not secret that I’m not a big fan of irrigation systems. I strongly believe that if you’ve been sold an irrigation system by a landscaper, you’ve been done a disservice; it’s easy money for them to sell you something that you shouldn’t have in the first place. I was installing irrigation systems in Florida when I was 17 and had about half a brain on my shoulders, maybe less. You don’t need one. You shouldn’t have one. If you’re using irrigation, you’re trying to grow something that is not meant to be there naturally, and I strongly believe in working with the environment around you and using that to your advantage. The land and the planet want to work with you, and if you let them, you’ll be okay.

There’s my rant on irrigation. Jane wanted a low-maintenance, natural lawn combined with a natural driveway to prevent asphalt and oil run-off into the ground. Asphalt driveways are nasty. You can’t go planting beautiful flowers and trees all around your yard…and then choke out the very same flowers and trees with ground water run-off from your driveway that is polluted with oil and gasoline. They don’t like it. It’s just a defeating purpose. “Hey beautiful flowers (that’ probably cost an arm and a leg, too)...here’s some oil-coated water to drink!”. It doesn’t make sense.

We use a clover mix on our lawns that is native to the Cape. Because it was early July and already blazing saddles out, we put sprinklers on timers for a week so that they only operated for about 15 mins a day to prevent burnout, and then we left it to its own. Low maintenance, easy-peesy. The old driveway was brough up to S&J to be crumbled up and recycled, and we replaced it with oyster shells. Done and done. Everyone and everything is happy and working together. 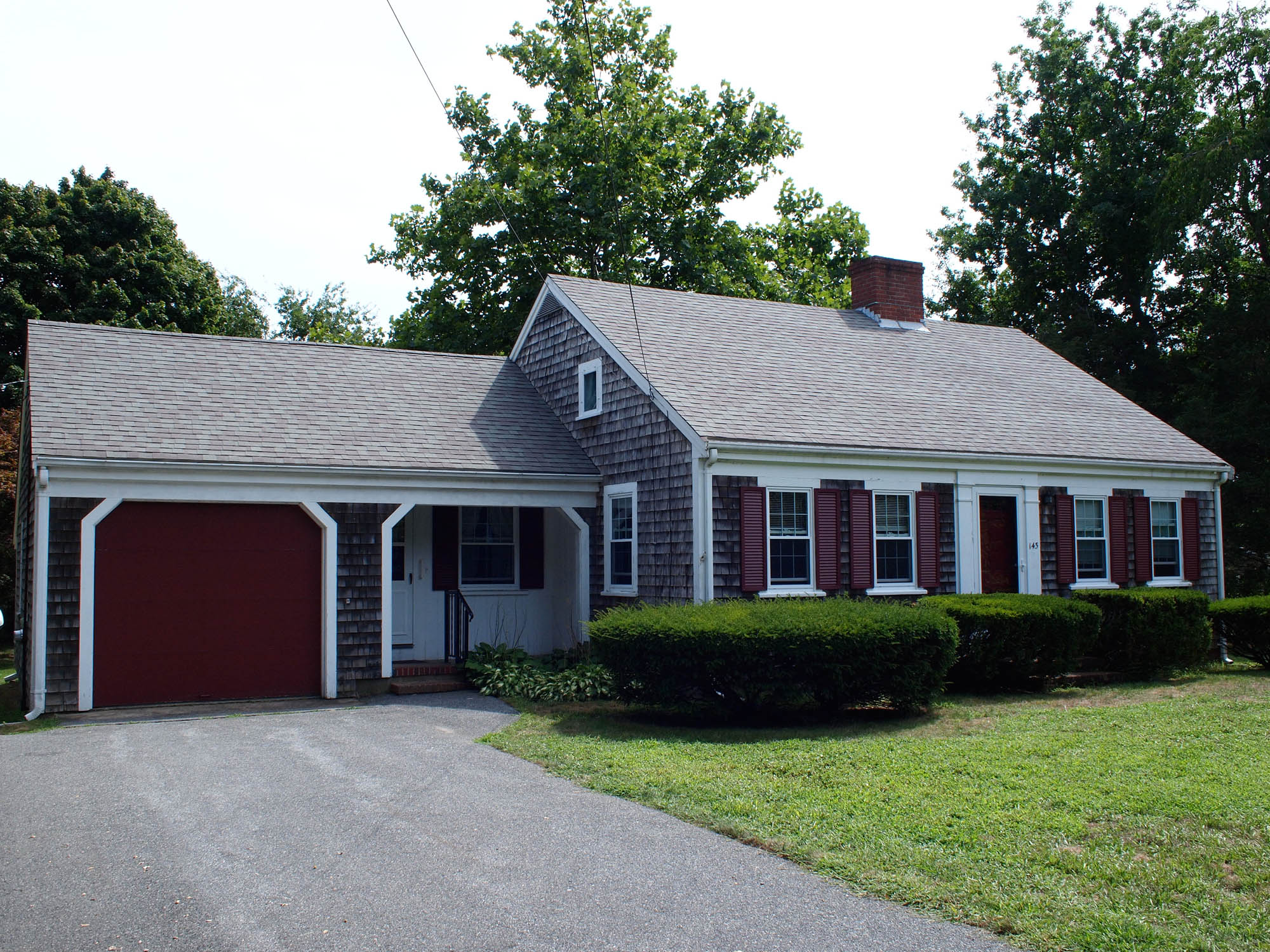 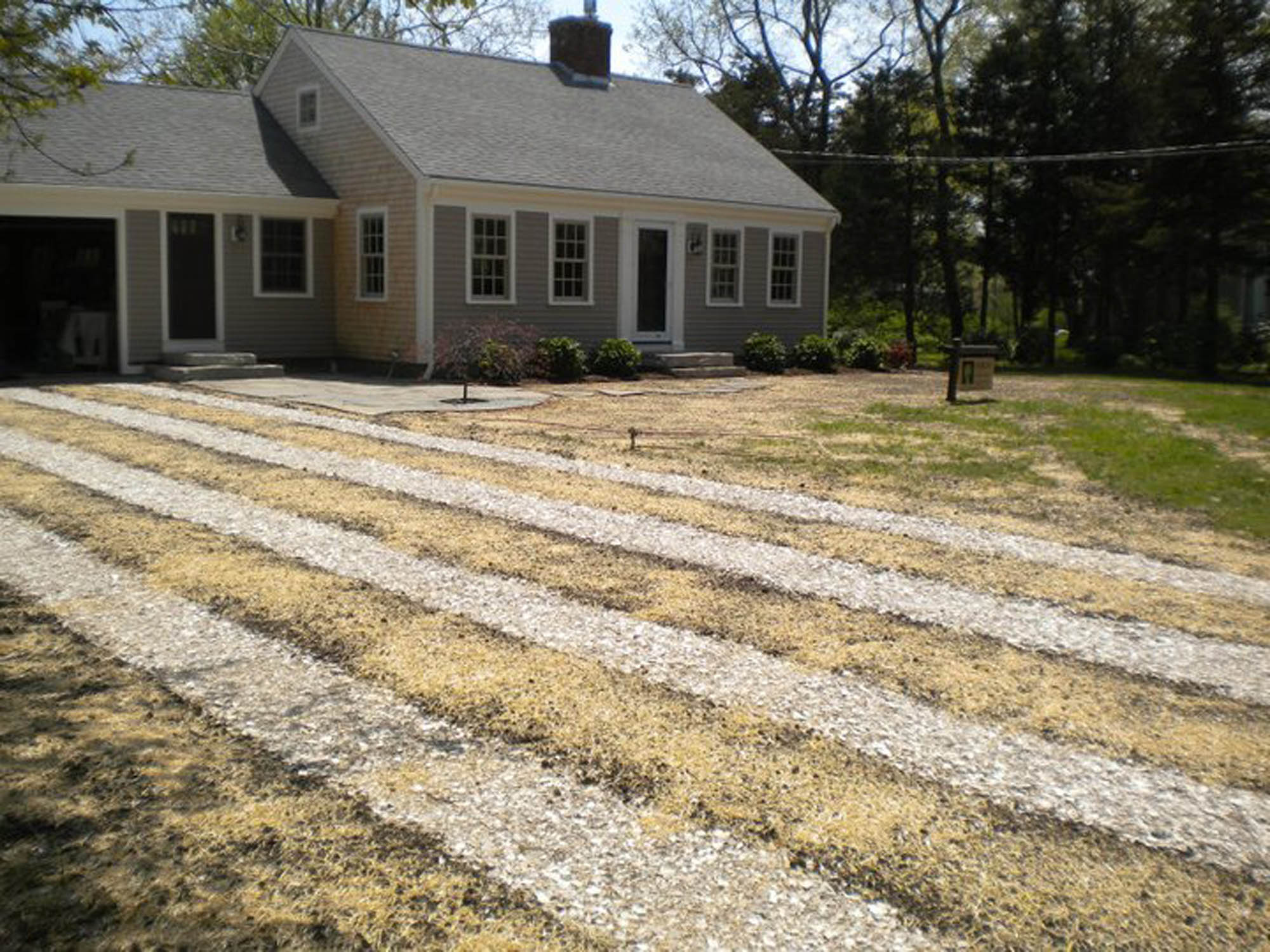 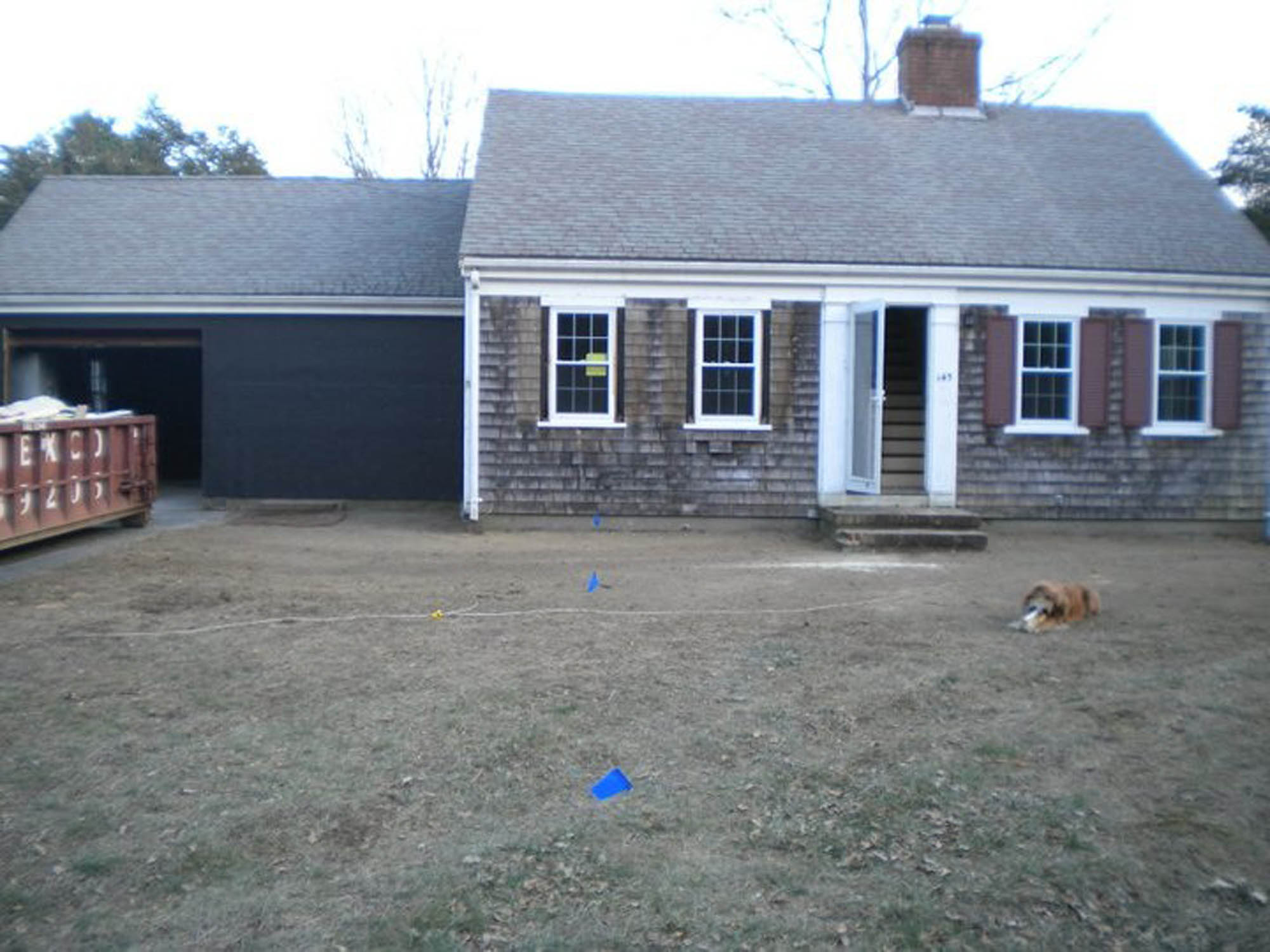 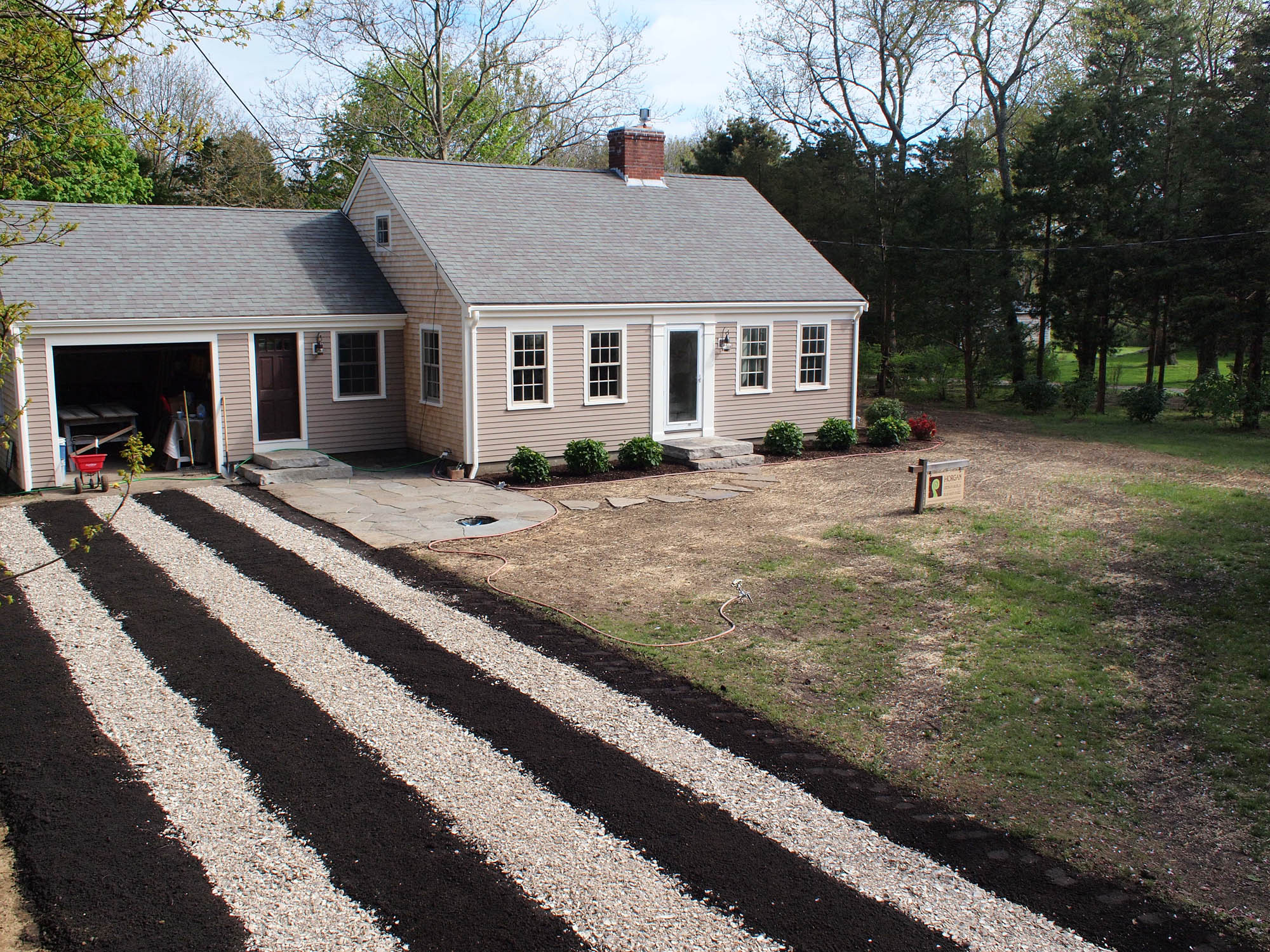 When we first stepped foot inside the Walker house with Jane, there were about a hundred rooms on the first floor alone. Okay…maybe there were four. But still, it was three rooms too many. There were lots of little nooks and crannies everywhere, and not to knock nooks and crannies (because they’re great in the right place, i.e. a tiny little cottage house, or an English muffin) but Jane needed and wanted an open(er) floor plan for her home.

As part of her design program, we extended the kitchen out towards the street by 5 feet with a small addition, then by installing a series of beams flush into the ceiling running front-to-back, we were able to remove a good amount of the interior walls that created the previously mentioned hundreds of rooms. 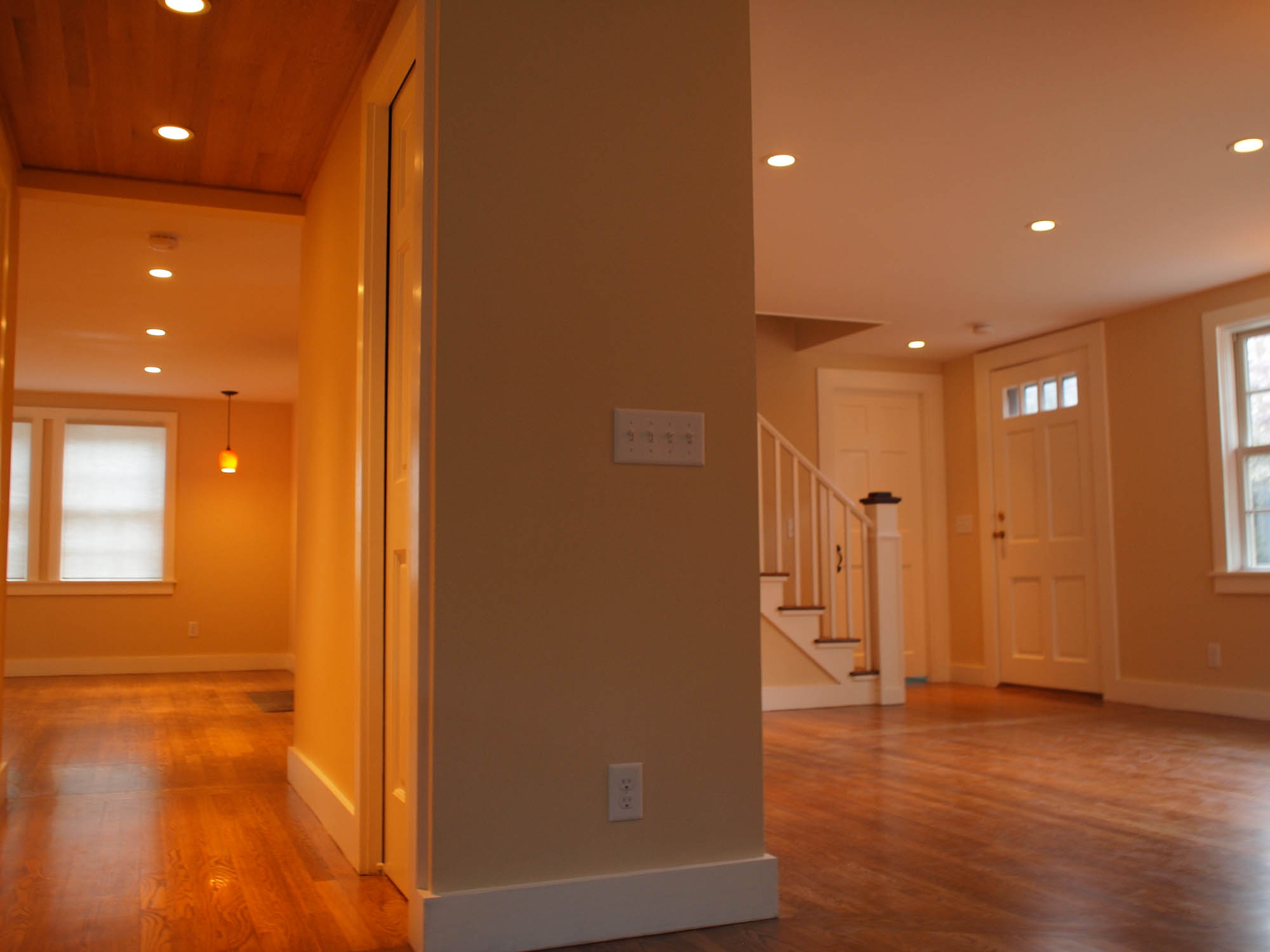 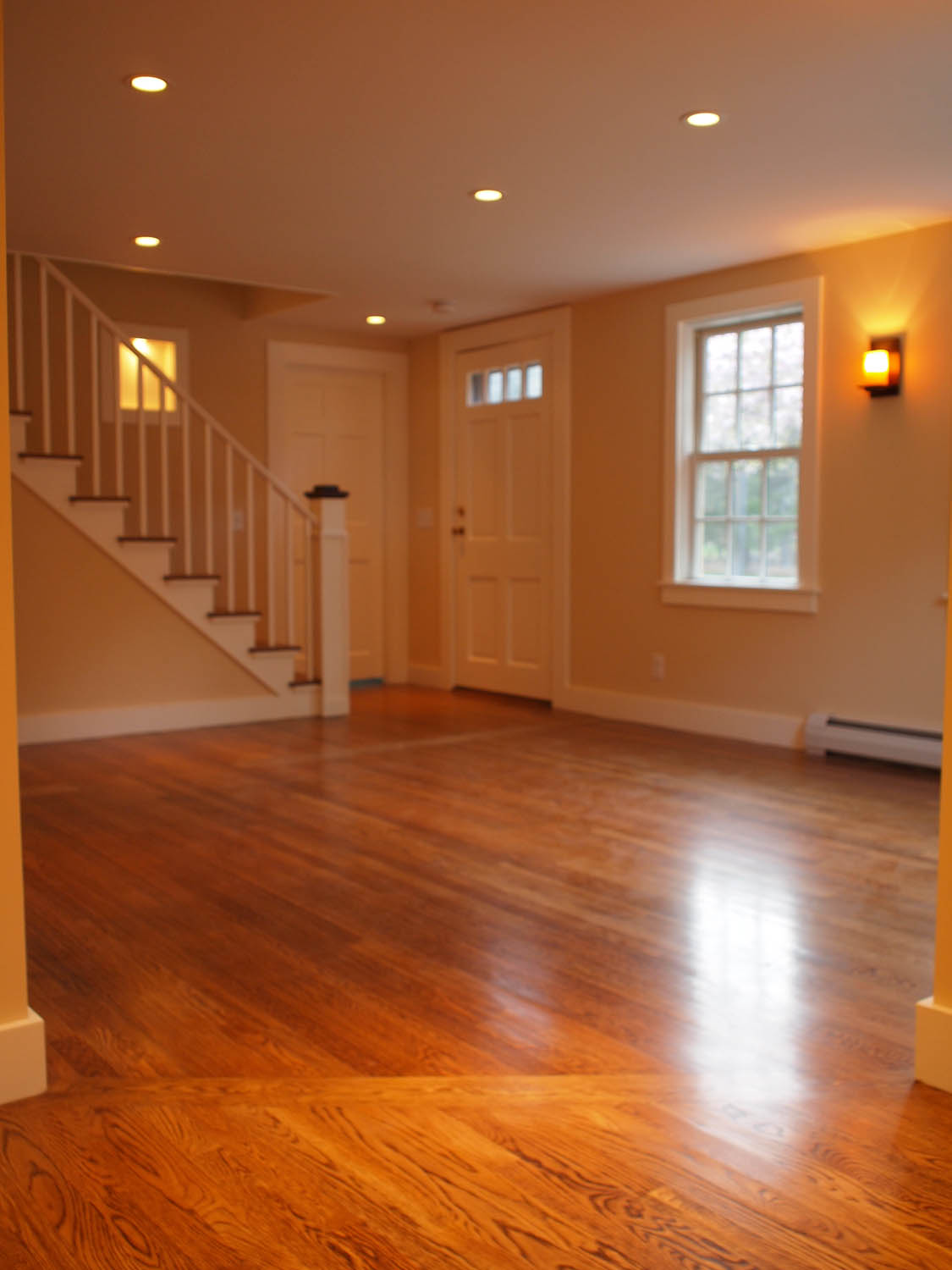 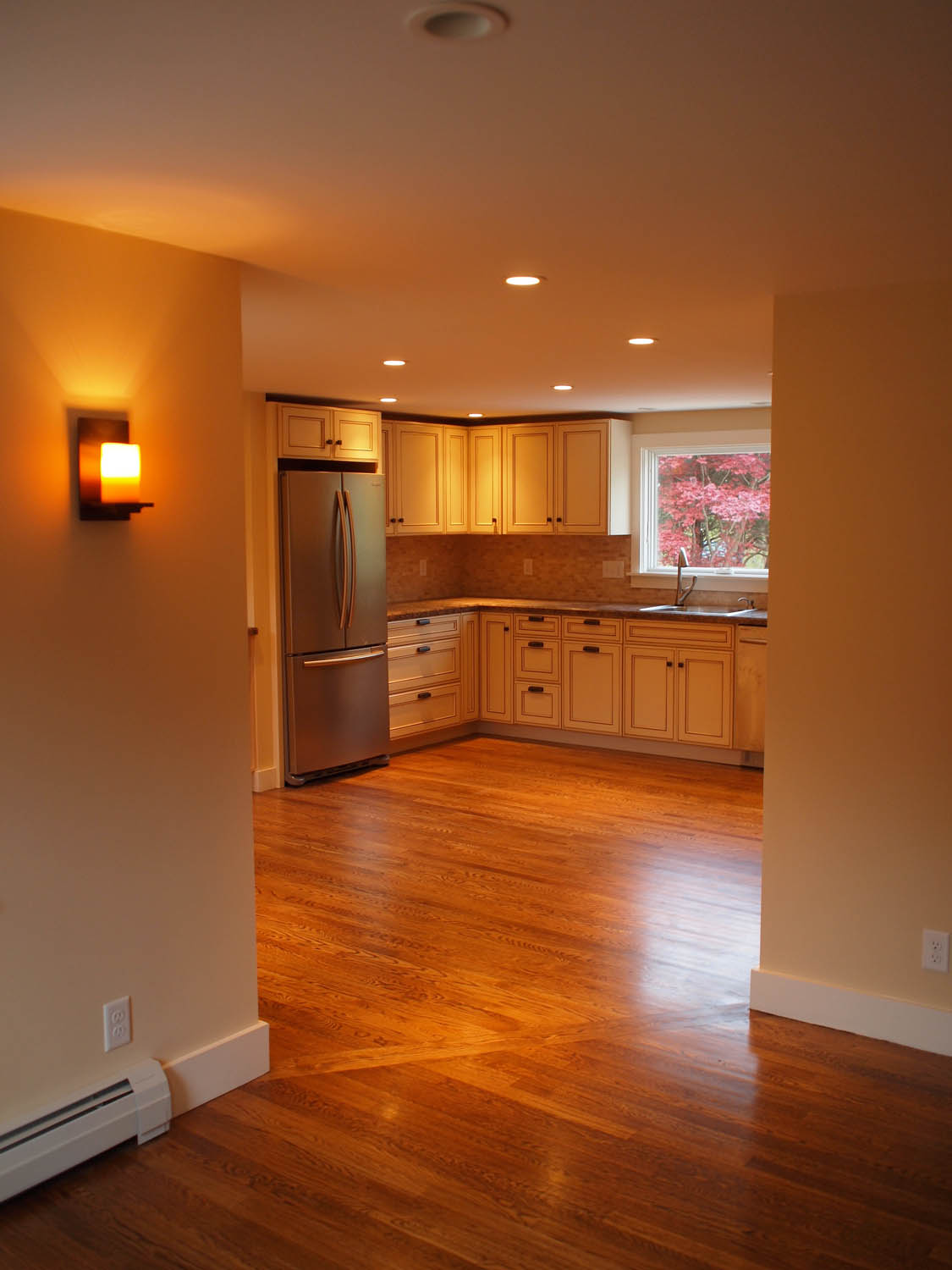 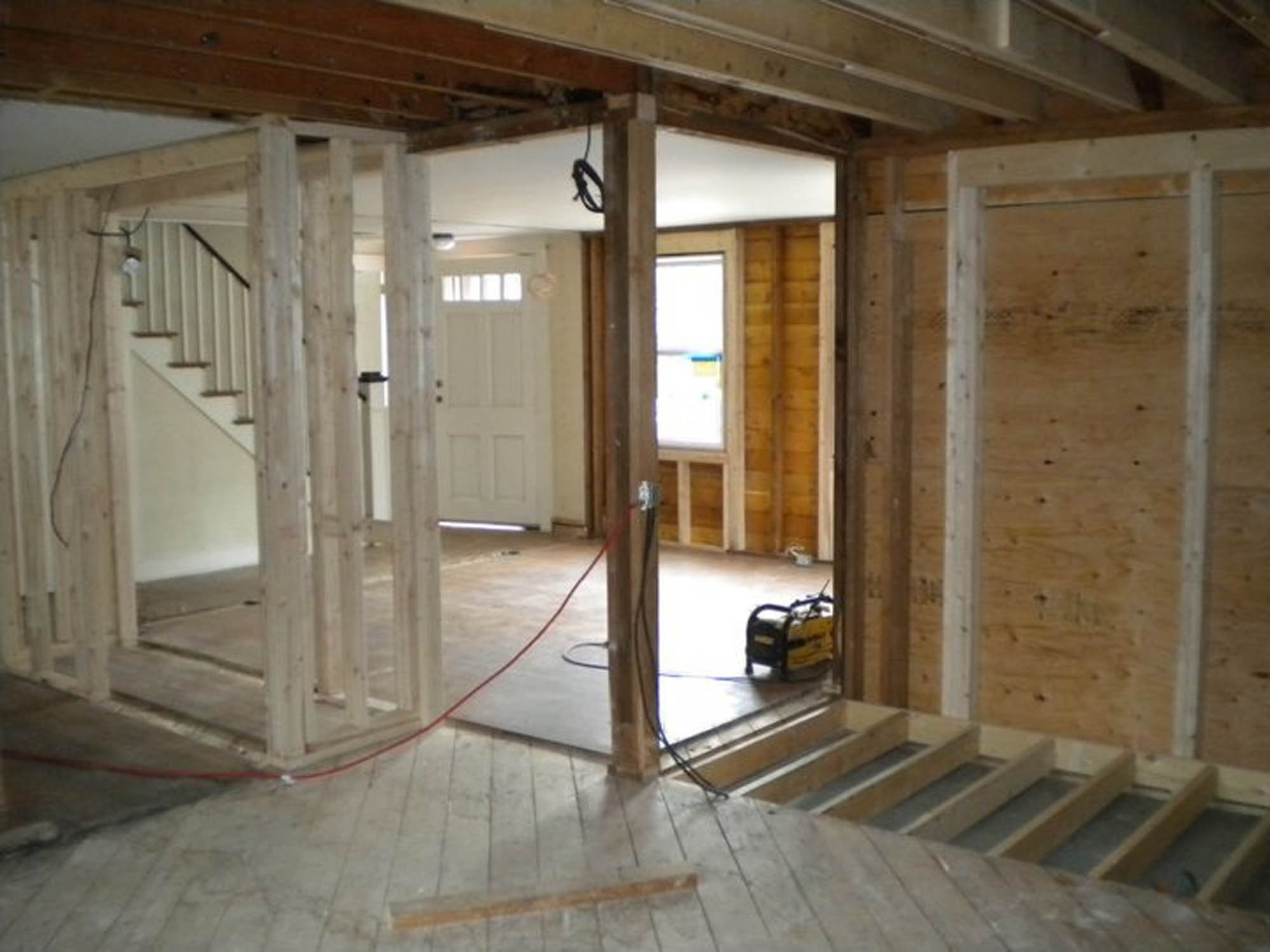 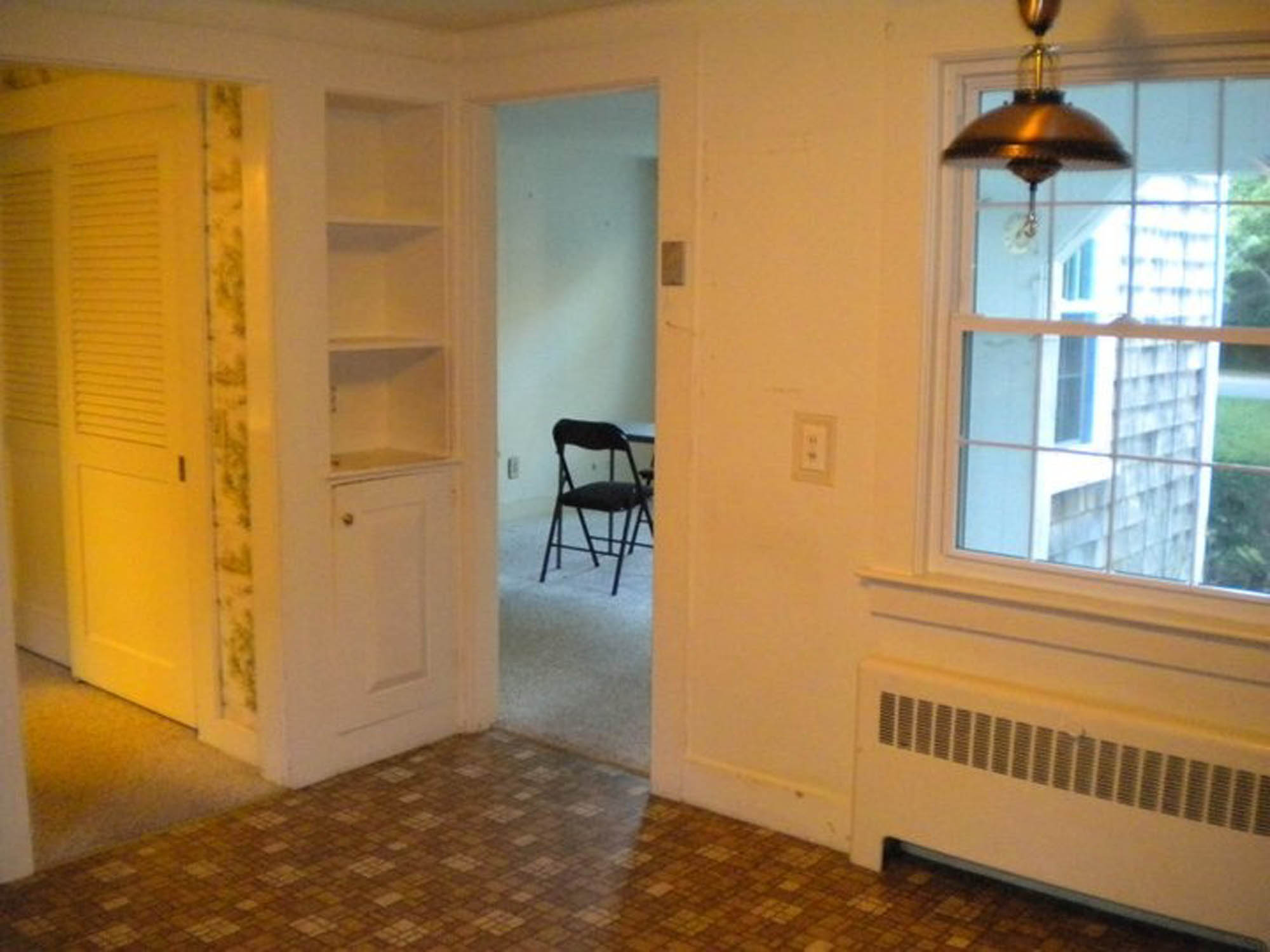 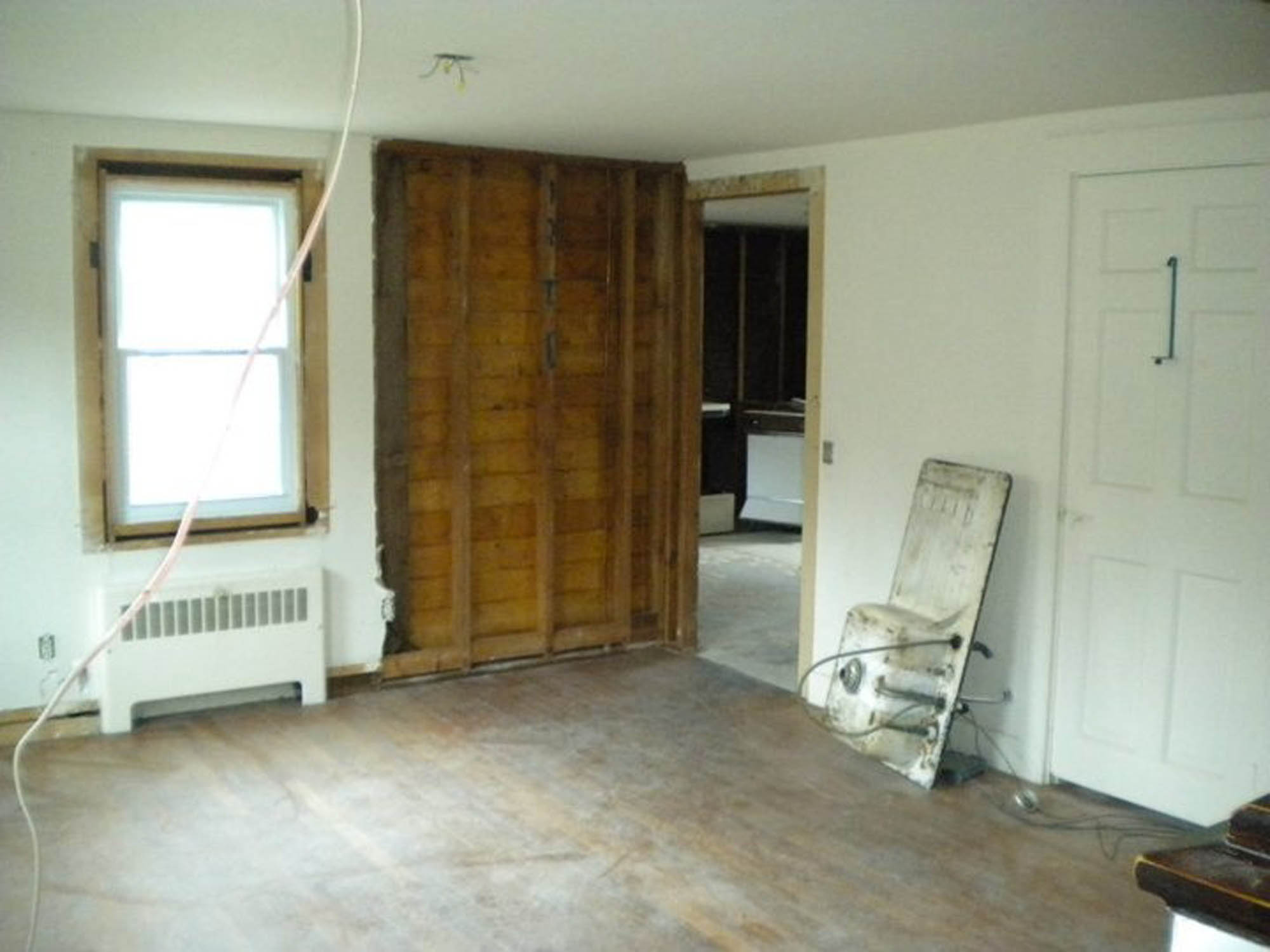 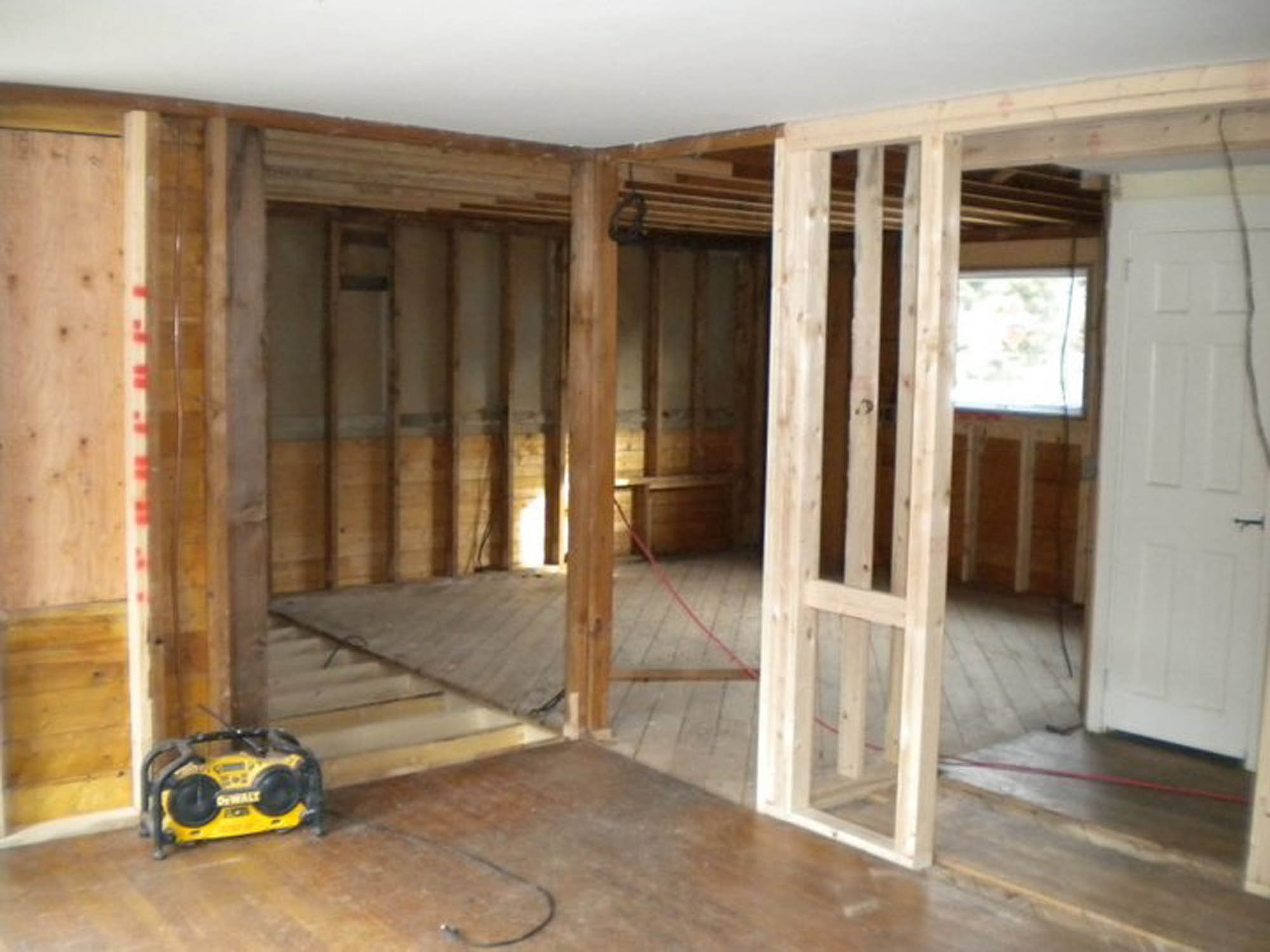